Christmas can mean only one thing – time to eat Brussels sprouts again! These little green orbs are a common sight on plates in deepest midwinter, particularly around the 25th December. Legend has it that, in the UK, the Victorians wanted to promote healthy eating habits in winter, especially during meat-heavy festive feasts. As Brussels sprouts were one of the few vegetables cheaply and widely available in late December, they became ubiquitous at Christmas dinners, and the association has stuck ever since.

And yes, they are named after the capital of Belgium – in the 13th Century, they were widely cultivated in the fields around Brussels (native to the Mediterranean region, sprouts first appeared in northern Europe during the 5th century). A member of the Gemmifera group of cabbages (Brassica oleracea), the edible buds look, and in many ways taste, like mini cabbages. And they’re simply bursting with nutrition – they are one of the most powerful cold-weather superfoods (sprouts are typically harvested in late fall and all winter – some say they taste sweeter after a frost).

These cruciferous greens are low in calories, at less than 40 per cup, and are also low-carb, packing just 8 grams per cup raw, including 3 grams as fiber. Providing a range of vitamins, minerals, antioxidants, they’re also rich in plant protein – a cup (150 grams) yields 4 grams – all of which gives sprouts a range of health benefits. 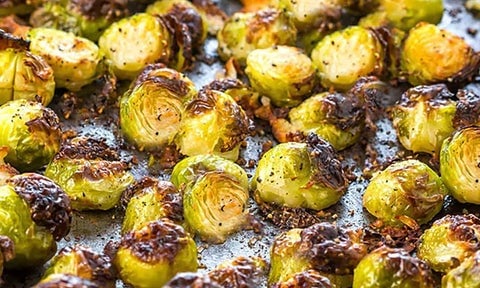 Half a cup of cooked sprouts provide a whopping 137% of your Daily Recommended Intake (RDI) of Vitamin K, and 81% RDI of Vitamin C – that’s more than an orange! It’ll also give you 12% RDI of both Vitamin A and folate, and 9% of Manganese. All of these are important; vitamin K is necessary for blood clotting and bone health, while vitamin c  helps promote iron absorption and is involved in tissue repair and immune function.

Brussels sprouts are antioxidant powerhouses, with one study finding that eating around 2 cups (300 grams) of sprouts daily slashed oxidative stress of cells by nearly 30%. They’re rich in kaempferol, an antioxidant that may reduce cancer cell growth, ease inflammation, and improve heart health. All those antioxidants also protect against carcinogens; another study showed that sprouts increase the levels of some detoxification enzymes by 15–30%.

That last characteristic is important for those suffering from, or at risk of, diabetes. Fiber moves slowly through the body undigested and slows the absorption of sugar into the blood. Sprouts also contain alpha-lipoic acid, an antioxidant that’s been extensively researched for its potential effects on blood sugar and insulin.

Super nutritious, and a great way to get many essential vitamins and mineral, sprouts are easy to cook too – they can be pan fried, steamed, sautéed, roasted, and even pickled. We’ve got some great organic sprouts, perfect for a Christmas dinner, a festive feast, or simply to add some colour and crunch to any meal. Stick some in your cart today and see for yourself how good sprouts really are.