How To Cook Salmon

Salmon, once considered something of a luxury food, is now one of the most popular, and common, fish in supermarkets and on menus. Consumption has increased three-fold since 1980, and salmon aquaculture is the fastest growing food production system in the world. Partly, this is due to salmon’s distinctive taste and pink-hued flesh – it’s denser, and more oily than white fish, with a rich flavour – but it’s also down to the ease with which salmon can be farmed.

In fact, the vast majority of Atlantic salmon commercially available today is farmed, whereas most Pacific salmon is wild, or line caught. Naturally, the later attracts a premium, and considered something of a speciality. Salmon can also be bought in many forms besides fresh fillets and steaks. Canned salmon is popular, as is various forms of the cured fish – gravlax has been cured with salt, sugar, and dill, whereas lox is brined. Salmon can be hot and cold smoked, and is also frequently serve thinly sliced as sashimi.

As a fresh fillet or steak, there are many ways of cooking salmon – it’s one of the most versatile fish in the kitchen. It pairs well with a side variety of ingredients too, particularly cream, white wine, lemon, chives, dill, capers, red onion, black pepper, soy sauce, horseradish, honey, and brown sugar.

The key is not to overcook – even thick fillets will cook very quickly, so make sure you keep an eye on them. Roasting is a great way to make a simple, tasty dinner. Rub the fillets with some olive oil, salt, pepper, and a few choice herbs, and pop them in the oven. For extra moist fillets, add a splash of white wine before wrapping loosely in tinfoil. Aim for four to six minutes per half-inch of thickness; when the fish starts to flake easily with a fork and the flesh looks opaque, it’s ready. 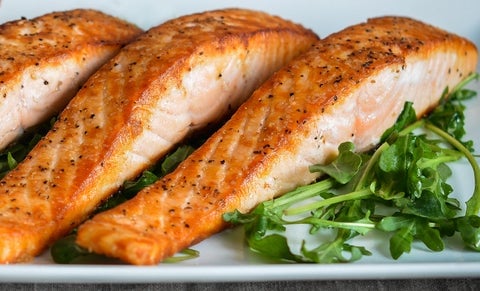 Pan frying also works a treat. Always start the fillets skin side down, and don’t use too high a heat – you don’t want a seared crust. Again, lightly season the fillets and fry in butter, and if the fillets are extra thick, they might need to be finished off in the oven to ensure the outside doesn’t burn.

Poaching is a somewhat old fashioned method, but there’s nothing more easy, healthy, and delicious than poached salmon. Start to finish it takes only 15 minutes, and the best way is to “shallow” poach - rather than submerging the salmon completely into a poaching liquid, simply add enough until the fillet is half submerged, bring to a simmer, cover and cook. White wine is great for this, as is cream or even milk. Various herbs and seasoning can be added to the sauce, and take care not to disturb it too much – salmon can easily fall apart in the pan.

For something a little different, and a delicious charred, caramelised crust, try broiling. Turn the oven to broil, place seasoned fish on a sheet pan, and slide it onto the top rack of the oven under a red-hot-glowing broiler – about 3 inches from the heat source is ideal. Check after three or four minutes, it should be done; just turn turn the broiler off and let the salmon sit in the oven for a few more minutes to ensure the centre is cooked.

We carry a number of different types of salmon, from smoked to wild caught fillets – we even have salmon burgers! Salmon really is a healthy, delicious fish, and it’s so simple to cook. Add some variety to your dinners and order some today.