How To Cook With Peppers

The humble pepper is a versatile ingredient, and a pantry staple for good reason. There are few styles of cooking or cuisines that peppers can’t be added to; they give a ton of flavour and colour to a dish. Easy to prepare and cook, and long lasting, peppers are a chef’s best friend – here’s how to get the very best from them.

Peppers come in a number of different shapes and varieties. The most common, and the one you likely know from the shiny, colourful piles in big box grocery stores, are bell peppers or capsicums, the fruit of Capsicum annuum. That's right, technically they’re a fruit, not a vegetable – botanically, they are classed as berries – and are native to Central and South America. The fruit was given its name by Europeans in the 16th Century – at the time, black peppercorns from India were a highly prized condiment, and so anything with a hot, pungent taste, as capsicums tend to have, was called “pepper”. The name stuck.

The different available colours indicate different flavours, and stages of the fruit. Green peppers are simply unripe red peppers and are the most aggressively flavoured, being vegetal, acidic and a little bitter, traits that soften with cooking. Once ripe and red, peppers are gentler and sweeter in flavour – these are the ones that can be used raw. Yellow and orange peppers are specific, individual varieties rather than stages between green and red; both were bred to be sweet, with a softer flavour. 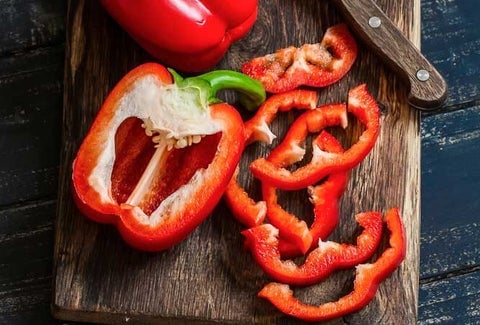 To prepare peppers, first remove the core, pith, and seeds. Some recipes call for peeled peppers; some people swear they taste better with the skin removed. To do this, either char over a flame until the skin is blackened and falling off, or pour boiling water over them in a bowl – both options are not particularly complicated. And whether using raw or to cook, peppers should always be cut from top to bottom in large slabs or strips, and have the pale inner vertical membranes removed, as these are always bitter.

If cooking on their own, peppers can be pan fried in some olive oil with salt or garlic, or roasted in the oven. Part of their appeal lies in their texture and satisfying crunch, so don’t overcook – peppers benefit from shorter cooking times, so they maintain their bite (the goal is to gently soften them, not turn them to mush). As such, when being added to stews, soups, casseroles, or stir-fry’s they go in last, and rarely need more than five to ten minutes total cooking time. 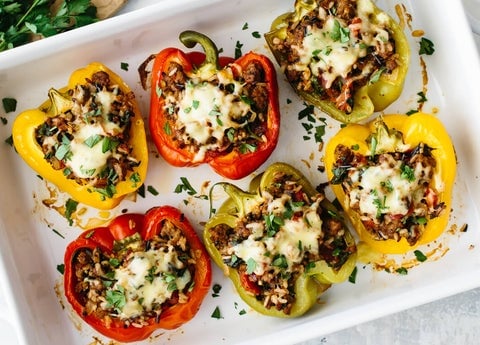 Peppers can be served on their own as a side dish or accompaniment, or stuffed and roasted, but it’s far more common to find them added to something else. A key component of many Mexican dishes, you’ll also find peppers in Italian and pasta dishes, Thai and Indian curries, Chinese food, and any number of stews and casseroles. Sweet peppers add depth to jambalaya, and can spice up various brunch dishes such as scrambled eggs or shakshuka. They also go well with eggplant and zucchini, as well as pulses such as kidney beans or black beans.

Feta cheese and halloumi work well with peppers, as does strongly flavoured meats and fish – chorizo, anchovies, pork, sausages, sardines. Anything spicy or smoked too – the natural sweetness of peppers serves as a great counterpoint to the heat of chilli or Cajun and jerk seasoning. Like we said, peppers go with just about anything, giving you more flavour, colour and texture, so spice up your cooking with our USDA certified organic red and yellow peppers.