NA Beer that “Dares to Be Different”: All About Surreal Brewing Co.

For some people, craft beer isn’t just something you order with your pizza, it’s a way of life. Like wine, beer can convey different aromas and flavors influenced by ingredients, terroir, brewing methods, and more. For fans, it’s these subtleties that give craft beer its allure and transforms its appreciation from a hobby to a passion.

But what if you don’t drink alcohol? For years, beer drinkers that avoid alcohol (for whatever reason) were left with precious few options, and of those, you’d be hard-pressed to find a brew with even an iota of the complexity of a true craft beer. Until recently, if you were looking for a 0.0% ABV beer that wasn’t O’Doul’s “near beer,” you were plum out of luck.

Luckily, NA beer finally seems to have caught up with the craft beer craze. If you’re looking for a brew that’s every bit as hoppy and citrusy as a high-ABV IPA but with none of the booze, look no further than Surreal Brewing Company.

What is Surreal Brewing Company?

Surreal Brewing Company is a health-centric, non-alcoholic brewery located in the San Francisco Bay Area, a region famous for both its proximity to wine country and its many craft breweries.

Founded in 2018 by husband and wife Tammer Zein-El-Abedein and Donna Hockey, Surreal Brewing was born out of a major life change for the couple—Donna surviving breast cancer.

Wanting to celebrate Donna’s successful treatment, the pair sought out an NA beer and were soon discouraged by the available options. There wasn’t an NA beer on the market that was worthy of celebration.

It was clear that the craft beer world had an inclusivity problem, and the pair decided to do something about it. Nine months later, their flagship brew, Chandelier Red IPA (named after the famous “drive-thru” Chandelier Tree in Northern California’s redwood forest), was born, immediately making a splash by winning gold in the World Beer Awards that year.

Their beers would go on to win the 2019 World’s Best Non-Alcoholic and Low-Alcohol Award, as well as gold medals for Best Pale and Best Dark NA beer in the United States.

People have all kinds of reasons for wanting to avoid alcohol: health, diet, allergies, faith, medication, work, addiction, and many more. NA beer, like Surreal Brewing Company’s, gives those people the option to partake in all of the socio-cultural aspects of enjoying craft beer without any of the potentially negative effects of consuming alcohol.

Drinking NA beer not only prevents a hangover and excess caloric intake; according to a 2012 study from the American College of Sports Medicine, drinking nonalcoholic beer may actually have positive effects on your health—namely that consuming NA beer reduces inflammation and the incidence of upper respiratory tract infection in healthy runners after a marathon.

Surreal NA beer also has the distinction of being the lowest-calorie beer currently produced in the US, with an average of just 17-50 calories per can (other nonalcoholic beer averages almost three times that). 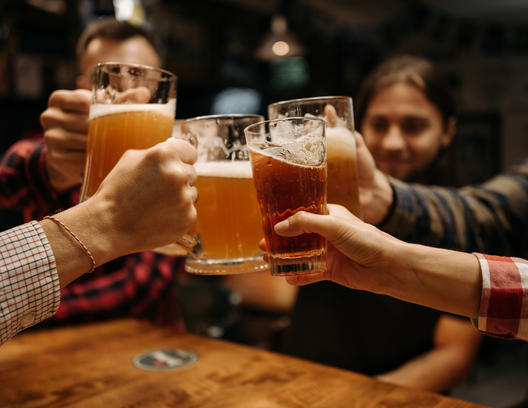 What Kinds of Beer does Surreal Brewing Company make?

With hoppy citrus notes and a smooth caramelly finish, this flagship brew is an ideal refreshment on a hot summer day or paired with spicy food or sharp cheeses.

Hazy IPAs are known for their bright, fruity notes, and this NA version is no different. This tropical delight is perfect for enjoying on the beach or alongside grilled meat, seafood, or rich desserts.

Dedicated to artists and other creators, this West Coast-style IPA is fermented with Norwegian Kveik yeast and a new, yet-to-named variety of hop. Its tropical forward notes are followed up 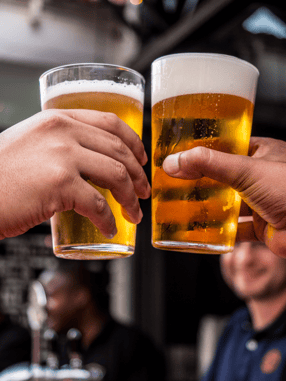 by a crisp, piney finish.

The addition of lactose gives this style of IPA its characteristic milkshake-y vibe. It’s smooth and creamy, subtly sweet, with notes of orange and citrus.

This rich, comforting porter has warm notes of dark chocolate and coffee balanced with earthy hops. Enjoy in the cooler months with a hearty stew or paired with your favorite dessert.

With added lactose and monk fruit, this chocolatey porter is a decadent dessert in a can. Enjoy with barbecued meat, aged cheddar cheese, or chocolate cake.

Arguably the most delicate of the Surreal lineup, this Kolsch-tyle NA beer is malty with a refreshing honeydew finish. Try with chicken, fish, roasted veggies, or light desserts.

Buffalo Market works with brands on the cutting edge of their industry and helps them find mass distribution in the biggest grocery chains across the United States.

Our tech- and data-driven approach to distribution ensures the products that customers want most are always fully stocked and merchandised.

If you’d like to learn more about how Buffalo Market’s food and beverage distribution can help your CPG brand or retail business, reach out to one of our experts for a demo today!