The first thing to note about red cabbage is that it’s not really red at all – its leaves range from magenta to a deep purple. This variation in colour is down to the soil, as the plant changes its color according to the pH value of the soil thanks to the presence of a pigment belonging to anthocyanins – in acidic soils, the leaves grow more reddish, in neutral soils they will grow more purple, while an alkaline soil will produce rather greenish-yellow coloured cabbages.

Native to southern Europe, and also known as blaukraut, red cabbage is today found all over Europe, throughout the Americas, in China, and is particularly prevalent in Africa. Belonging to the Brassica oleracea family, it’s a seasonal plant that’s seeded in spring and harvested in late fall or winter. Red cabbage keeps far better than its "white" relatives, so does not need to be converted to sauerkraut to last the winter. Similar in taste to green cabbage, the red variety is richer in various vitamins and minerals, and provides numerous health benefits. 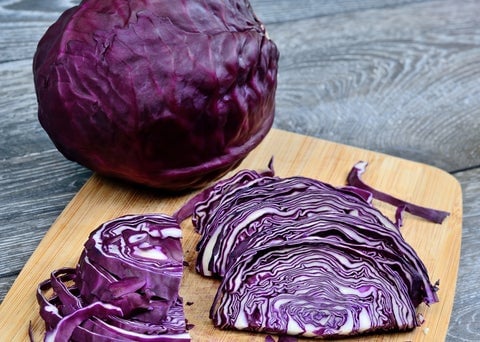 It’s also rich in sulforaphane, a sulfur-rich compound that forms when raw cabbage is cut or crushed, which research shows can help maintain a healthy heart and fight cancer. It’s anti-inflammatory too, reducing gut inflammation and intestinal mucositis, as well as helping new mothers reduce breast pain, swelling, and inflammation due to increased milk supply and blood flow during the early postpartum period.

Diets rich in of cruciferous vegetables such as red cabbage have been shown to lower the risk of colon cancer, in part due to the high level of anthocyanins, and also because of the two grams of fibre per serving, which keeps the gut healthy and helps you digest foods more easily (70% of this is insoluble fiber).

Red cabbage is very low in saturated fat and cholesterol too, and being widely available, easy to grow, and relatively cheap, is great for those looking for healthier ingredients. Our red cabbage is USDA certified organic; add some to your cart today, and boost your intake of minerals and vitamins.