In a push to reduce the consumption of meat products, as well as dairy and eggs, city jails within San Francisco are required to slash their intake of these items by 50% over the next three years. In a vote passed by the Board of Supervisors, the statute was subsequently passed into law by Mayor London Breed. Further stipulations include that consumption of meat must be reduced from its current rate in public hospitals – such as Laguna Honda and Zuckerberg General – by 15% within two years, by the year 2023.

The desire for a more substantial plant-based diet within San Francisco’s penal institutions is driven by the adverse ecological effects of rearing animals for human consumption, and its consequent impact on climate change. According to the United Nations’ Food and Agriculture Organization, animal livestock is responsible for almost 15% of global greenhouse emissions.

The initiative stems from pressure placed against the city of San Francisco from environmentalists who feel the city’s wealth – indeed, as one of the richest metropolitan areas on the planet, thanks to its being the headquarters of Microsoft, Google, Gap clothing (and Buffalo Market!) – could surely be utilized in supporting such a cause.

This new law, heralded as the first of its kind, is one part of a wider push toward meat-free meals in federal institutions across the US. In Arizona, for instance, the announcement was made that prisons in the state would implement vegan meal options as replacements for halal and Kosher cuisine.

In an announcement issued by David Shinn, the state’s Department of Corrections director, the vegan meals would satisfy dietary requirements of all religions practiced by prison inmates. The Common Fare Meal plan, under which these meals will be provided, aims to cater for every religious need when it comes to the nutritional content of its inmates’ food. This scheme is available to all other prisoners as well, provided they make it known with 30 days’ notice that they wish to move to a more substantially plant-based diet.

Benefits of a plant-based diet

The leading impetus behind the move away from animal livestock and dairy products in San Francisco is saving on land usage, as well as reducing permanent soil damage and desertification. With a reported quarter of all global emissions being the result of food production, it is strongly believed that reduced consumption of animal livestock could have significant effects in lowering the risks of climate change.

Principally through the land clearance required to rear the animals eaten by humans, the impacts on our climate are also produced by the methane gas expelled by cows and other livestock. Declining forest acreage, combined with an uptick in organically-produced noxious gases, limits the natural absorption of carbon dioxide enacted by trees via photosynthesis. In this process, the soil also absorbs CO2 and locks that carbon in, but when the land is repurposed for livestock that carbon is the released back into the atmosphere.

Thus, it is the side effects of food production specific to animal rearing which causes the accelerated rate of global warming, meaning that the major benefit of plant-based diet would be the heightened sustainability it brings with it.

The result of the higher temperatures brought on by climate change help decompose the soil at a faster rate than usual, in turn releasing a greater volume of greenhouse emissions into the atmosphere. It is only by reducing the output of methane gases, as well as removing the risk of soil disturbance caused by deforestation, that these lasting impacts can be mitigated – and even reversed.

Solutions to this problem include a program of controlled grazing, reducing the consumption of grass and root damage integral to the structure of the soil, as well as increased planting to stimulate soil fertility.

While in the UK there have been movements led by vegans and vegetarians to remove lamb and beef products from school dinner menus – primarily under the #NoBeef hashtag – there have been noteworthy culinary innovations made in the US, in the form of vegan burger patties not unlike their meat-based counterparts. It is on account of their iron-rich component heme that affords the vegan patties a taste similar to that of a genuine beef burger. 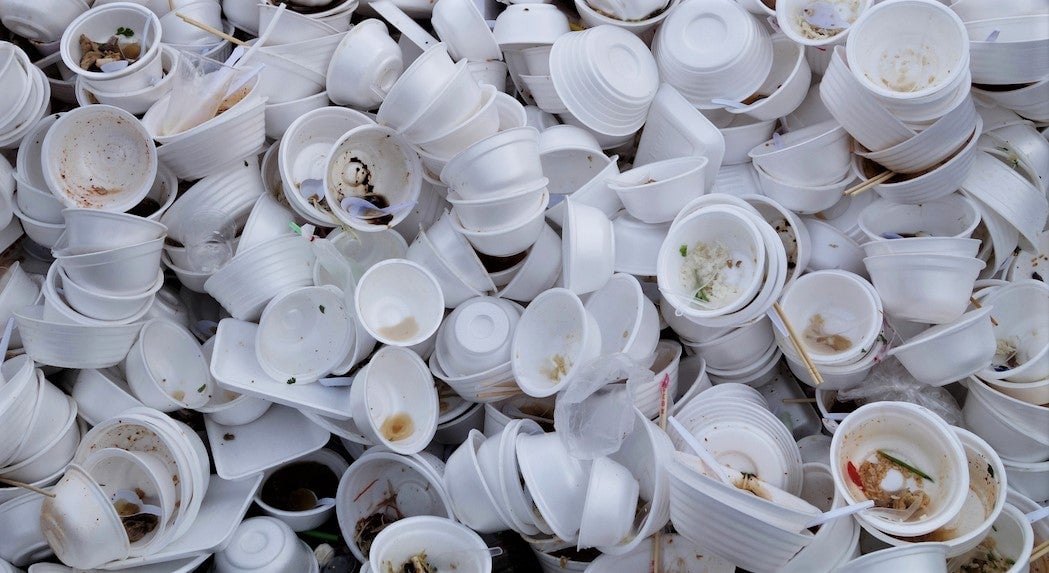 The reduction of dairy and eggs consumed within San Francisco’s jails is something of a follow-up to earlier legislative action passed by Mayor Breed, when she was then President of the city’s Board of Supervisors. In 2016, a ban on Styrofoam packaging was imposed to reduce usage of non-recyclable materials, with Breed as its campaign spearhead. Fittingly, Styrofoam is commonly used in the manufacture of egg cartons, among other things like packing peanuts and disposable coffee cups.

Such was her devotion to cutting back on the distribution of animal products in this environmentally unfriendly material that Breed took part in a 75-second campaign video, featuring a spirited assault on the “Styrofoam monster”. Really just a guy dressed as a food container, the monster is nevertheless defeated by Breed’s gutsy disdain for the sentient piece of packaging and the low-key chaos it causes.

It’s fair to say the campaign served its purpose, as it was not only awarded the distinction of “most creative ad campaign” by the San Francisco Chronicle, but may have had something to do with Breed’s unanimous re-election as Board of Supervisors President in 2017.

How to lower your carbon footprint

With the shift toward a more sustainable diet being made on a federal level, it’s fair to say you don’t need to be a prison inmate to cut out meat from your diet. There are plenty of ways to implement more vegetables into your meal plan without losing any of the protein and nutritional value of consuming red meat. From the simplest fiber supplements to be found in cannellini beans, you can get a whole load more of your daily minerals and vitamins in fennel, strawberries, and bananas.

Moving away from a meat-based diet will not only save the planet but also encourage a more adventurous approach to cooking, as you begin to utilize more colorful ingredients in your recipes. To get the ball rolling, then, why not try our brussels sprouts Nasi Goreng recipe for a delicious vegetarian dish that’s loaded with flavor?