Skyr 101: Why This Icelandic Yogurt Is Great for the Body

The yogurt market is huge. According to Alliance Market Research, the global demand had already reached over $75 billion in 2016. By 2023, it would balloon to at least $107 billion. That’s a compound annual growth rate (CAGR) of around 4.5 percent.

The popularity of the smooth, sour-sweet food isn’t surprising, however. Some experts claim that yogurts can promote healthy digestion by adding more good bacteria to the gut. They are great as meal replacements and desserts. One can even add them to smoothies to thicken the recipe, add more flavor and texture, and boost the drink’s nutrients.

But not all yogurts are created equal. Some stand out because of the delicate manufacturing process and excellent quality. One of the best-fermented products out there is skyr. 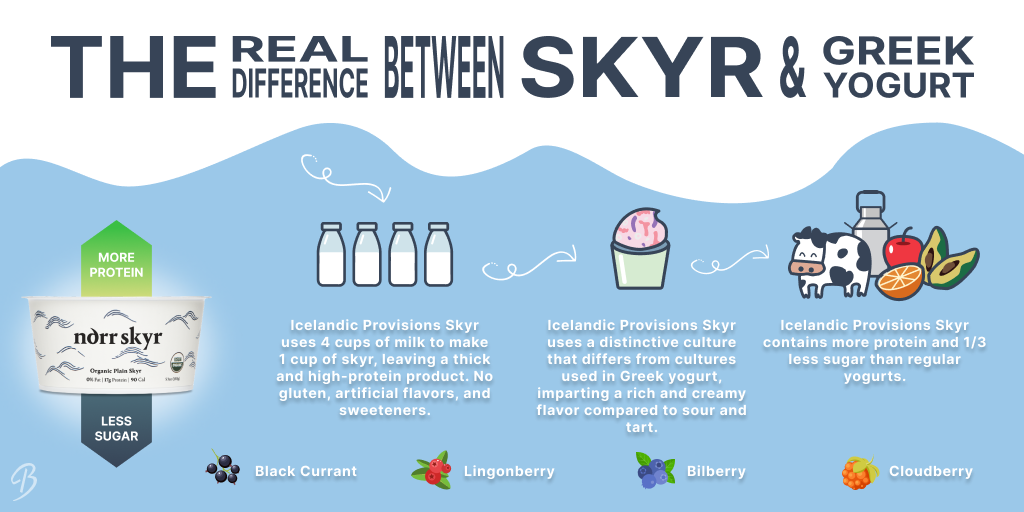 Skyr (pronounced skeer) may sound foreign, especially for Americans, but it is a staple in Iceland. Its tradition (and story) dates back to the arrival of the Nordics in the country sometime in 874. By the 1100s, many tales circulated among the settlers already mentioned this fermented dairy product.

The culture of making skyr, therefore, has been around for thousands of years, although before, the recipe and process were handed down from mother to daughter.

In the 1900s, commercialism became popular in Iceland, and this boosted the popularity of skyr. Stores selling them began popping up until they spread across the country. But it took many more decades before Iceland’s pride officially arrived on the American shores sometime in the 1960s.

Because there’s not a lot of information about skyr, at least among the American population, many often thought that this is another type of yogurt. It doesn’t help that it’s packed the same way as conventional yogurts in the market.

Broadly speaking, one can consider skyr as yogurt since the primary definition of this food is a fermented dairy product mixed with probiotics. However, this Icelandic goodie is more than that.

It is a fermented skim milk cheese that looks and tastes like yogurt. Its consistency or texture is similar to those of Greek yogurt. However, consumers may find this sweeter and thicker.

The process of making skyr is meticulous, but the basics include the following:

People in Iceland enjoy their skyr as a side dish, snack, or dessert. But there are far healthier reasons to include this in one’s diet besides pleasing the palate:

1. It Is Rich in Calcium

Calcium is a trace mineral, which means the body doesn’t need a lot of it to work optimally. However, it is still essential as it helps support many functions.

First, this mineral is vital in keeping the bones and teeth healthy. To be more specific, calcium helps create hardness and structure. Otherwise, weak bones can increase the risk of degenerative joint diseases that can include osteoporosis (wherein the bones become brittle and, thus, prone to breakage).

Second, calcium is one of the key minerals for various clotting factors. When a person bleeds—say, because of a wound—the body gets into action to seal it to avoid losing a lot of blood. But what triggers it is the body’s ability to clot.

The body also needs calcium to help regulate hormones, such as estrogen and thyroid. Both are needed to maintain proper metabolism.

The daily amount of calcium the body needs depends on age. The older one gets, the more they should consume food rich in this trace mineral. It also varies between men and women. Females may need it more, however, since they are more prone to osteoporosis. Either way, skyr can already supply as much as 25 percent of the daily nutritional value.

2. Skyr Is an Excellent Source of Protein

Protein is one of the macronutrients along with carbohydrates and fat. In other words, the body needs a substantial amount of it. Based on the dietary guidelines, a sedentary adult may have to consume 0.36 for every pound of their body weight per day. If they weigh 150 pounds, they may need 54 grams of protein.

However, it can also differ between men and women. Usually, males have to consume more protein since they have more muscle mass than females.

What makes protein a macronutrient, though?

First, the body can break it down into its building blocks called amino acids. These acids can combine with other biological substances to promote various cellular functions, which range from metabolism regulation to pathway control.

Second, protein is necessary to maintain structure. Think of collagen, which is the most abundant type of protein. It supports not only ligaments and skin but also blood vessels, teeth, and even corneas.

Skyr contains at least 11 grams of protein depending on the size, which is substantial. Even better, eating this may help you become less dependent on conventional sources of protein such as red meat or, worse, ultra-processed food.

In 2020, a study by Northwestern University revealed an association between processed red meat and the increased risk of premature death and heart disease. In fact, the odds of developing cardiovascular disorders could increase by as much as 7 percent.

3. It Is Great for People Sensitive to Whey

Not everyone can handle dairy products well because of lactose malabsorption and lactose intolerance. Malabsorption refers to the body’s inability to break down or absorb lactose, the sugar found in milk.

This will eventually lead to lactose intolerance, in which the body begins to show symptoms that range from bloating to abdominal pain. In the United States, approximately 36 percent of the population has lactose malabsorption.

Why does this happen? This is because of lactase, an intestinal enzyme necessary to break down lactose. The body produces it until you’re 5 years old, depending on the race. As the person gets older, the level of enzyme goes down. But for those with intolerance or malabsorption, the decline is more significant.

Yogurts contain lactose. Skyr, however,  is more tolerable because they don’t contain whey, which has more sugar than casein. Manufacturing skyr removes whey during straining.

To be clear, the body needs fat for a variety of functions. For this reason, no one should avoid it. As mentioned, this is a macronutrient.

However, not all fats are the same. There is unsaturated, saturated, and trans fat, which differ in terms of their carbon bonds.

Many deem unsaturated fats the healthiest because they can increase high-density lipoprotein (also known as “good cholesterol”). Trans fat is actually a type of unsaturated fat, but it is synthetic, therefore not healthy. A lot of studies have already linked trans fat to several chronic diseases. It is so harmful that, in 2015, the Food and Drug Administration (FDA) banned artificial trans fat in the US.

Saturated fat is the one in between and is often a subject of controversy. Although many types of research showed that it isn’t as bad as people think, the consensus remains that consuming a lot of it can be harmful in the long run as it can raise low-density lipoprotein (or bad cholesterol).

When it comes to milk, what it contains is saturated fat. But the amount can vary depending on the kind. Whole milk, for instance, can have 3.25 percent milk fat. Skim milk, which is the main ingredient in skyr, is no more than 0.5 percent milk fat.

Because the amount of milk fat in skim milk is low, calories are also not high. The latter contains 83 calories as opposed to 146 calories of the former.

Like Yogurt, Skyr is a Good Source of Probiotics

Probably the biggest reason to consume skyr today is to improve gut health, particularly the microbiome.

What is the gut microbiome? This refers to the colony of microorganisms composed of viruses, bacteria, protozoa, and fungi, as well as their genetic material. Together, they establish various relationships that help in the following:

The problem is that many Americans suffer poor gut health primarily due to their diet (heavy on sodium, bad fat, & sugar) and sedentary lifestyle. These could lead to gut dysbiosis – the imbalance of good and bad bacteria.

Skyr contains live bacterial cultures – also known as probiotics. By consuming it, one is adding more beneficial microorganisms into the gut. In a 2020 research, probiotics were discovered to help combat childhood obesity by promoting weight loss and lower body mass index (BMI).

What’s the Best Brand of Skyr?

In the US, there are a few companies that produce skyr, but perhaps the best of them all is Norr Organic. Here’s why:

There’s a good reason many people call skyr a super-healthy food: it is low in calories, contains less saturated fat, is perhaps more tolerable than other dairy products, comes with both micro and macronutrients, and promotes healthy digestion. Even better, products like Norr Organic gives everyone access to cleaner, more ethical type of fermented dairy.