The History of Bagels and Lox

It might come as a surprise, but lox wasn’t invented in America. Neither were bagels. Yet it was Jewish New Yorkers who first put them together, creating the sublime combination we know and love today. 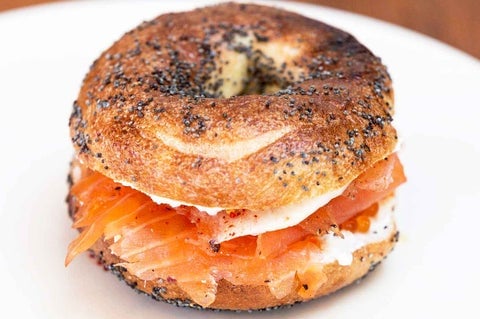 So where do they come from? Lox originated in Scandinavia, where fishermen in Sweden perfected the art of preserving salmon in saltwater brine sometime in the 19th century. Bagels are even older – they were allegedly first spotted on the silk route in China, before being refined in Italy in the 14th century. But the story of how they came to be enjoyed together has many interesting facets, taking in a church edict from the 12th Century, the 1930s fad for Eggs Benedict, and the unique rules of Jewish dietary law.

One version has it that, thanks to a Church ban on Jewish bakeries in 12th Century Poland, it came to pass that Jews were only allowed to work with bread that had been boiled. Hence the bagel (the first references to "bagel" in written Yiddish appear around 1610). Amd, having become massively popular among Jews in Eastern Europe, it came with them to America n the 19th and 20th Centuries.

And why lox, or salmon? There are several reasons. Firstly, fish is considered to be pareve, so it can be eaten in both a dairy or a meat meal. And secondly, while meat has many requirements regarding slaughtering and preparation for it to be classed as kosher, it was far easier to to buy whole kosher fish, even from non-Jewish stores. Also, the preservation technique required for lox minimized the need for refrigeration, an essential quality in early 20th century NYC. 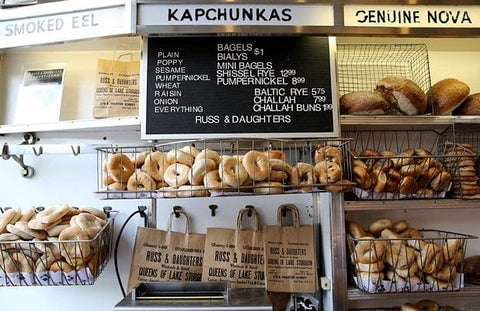 How all this came together is explained partly due to the 1930s demand for eggs benedict - two halves of an English muffin topped with ham or bacon, poached eggs, and hollandaise sauce - a dish that fast became a brunch sensation. Obviously, Jewish people were unable to eat it, as it contained both pork and involved the mixing of dairy and meat (a violation of kashrut, Jewish dietary law).

So, the Jewish community in NYC developed the bagel with lox and schmear as a kosher alternative. According to Jewish culinary historian Gil Marks, this was unique to Jews in New York; Jewish communities in Poland had traditionally spread schmaltz on their bagels, or eaten them with cholent or other various soups and as a dinner roll.

The dish was considered an ideal substitution - still delicious, with plenty of protein and a similar creaminess (replacing salmon for ham, cream cheese for hollandaise sauce and sliced bagel halves for sliced English muffins). And it remains as loved now as it was then - it's one of the most popular things to eat in New York, and by Jewish Americans anywhere.

Today, there are five key ingredients; the lox and a bagel (obviously), cream cheese, sliced red onion, and a generous spoonful of capers. The cream cheese is spread on the bagel first, with the lox added on top, followed by the onion and the capers. As for the bagel itself, it need not be plain – sesame seed, poppy seed, or wholemeal are all fine (but don’t ask for a sweet bagel – that way lies ruin.)

It is perfect lazy weekend brunch dish – healthy, wholesome, and super easy and quick to make. So beloved is it that it even has its own national holiday – February 9th.

We’ve got everything you need (red onion, capers, salmon, cream cheese, bagels) to whip up some bagels and lox this weekend, so add these to your cart and treat yourself to one of the world’s best brunches!