What Are Heirloom Tomatoes?

A big problem with the produce you find in traditional supermarkets is that, sometimes, all is not what it seems. Take tomatoes for example. Most commercially grown tomatoes have been bred to resemble what you think tomatoes should be – perfectly round, plump, shiny, and super red. But the taste? Something of an afterthought. That’s because they were created to appeal to the eye and for consistency, not for flavour, hence the prevalence of the watery, bland, uninspiring fruit in big box stores and fast food across the land

This is where heirloom tomatoes come in. You might have heard of them, or seen them on menus. Perhaps you’ve already eaten some. And they’re a hot food trend for a very good reason – they are absolutely delicious! But what are they exactly? And how are they grown? The key idea is their genetic purity, and the preservation of distinct varieties.

The seeds are what make heirloom tomatoes so special. They are passed down from season to season, taken from the plants that produce the very best fruit. This means that farmers can naturally select for a number of traits, such as size, shape, colour, or juiciness. They’re also often open-pollinated, meaning the process happens naturally by birds, insects, or the wind. It’s the polar opposite of industrial growing. 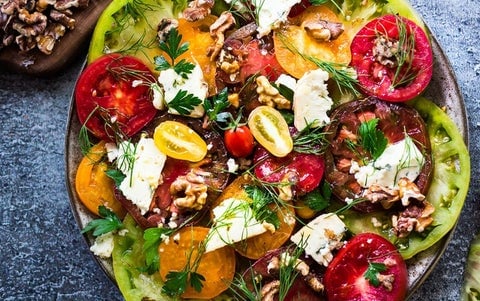 As such, heirlooms are genetically pure – their DNA has not been manipulated in any way (unlike most of what you find in supermarkets), and some varieties have remained unchanged for over 50 years. Hence heirloom tomatoes’ idiosyncratic qualities, and wildly varying sizes, textures, colours, and flavours. And that last one explains their growing popularity – they are so much tastier than their over-engineered supermarket cousins. Heirlooms usually have more locules – the cavities with the seeds – than commercial hybrids, and these locules are flavor centers, full of volatile compounds such as geranial, which enhances their innate sweetness.

Heirlooms are also left to ripen on the vine, as opposed to typical supermarket hybrids, which are picked when firm and green and ripened in warehouses with ethylene gas. By the very nature in which they are grown, the overwhelming majority of heirlooms are USDA certified organic too, adding to the health benefits and a better ecosystem for producers.

We adore heirloom tomatoes, and are working hard to bring you the very best varieties from across California. Fall is the perfect time for rich, earthy, acidic Darklooms, a predominantly purple-black variety that goes great in salads and with goat’s cheese. They’re also spectacular roasted with just oil and salt, or just topped with some herbs and vinaigrette and eaten raw.

Stick some heirlooms in your cart today and taste for yourself why they’ve become such a hot ingredient.