The Buffalo. Noble beast of the plains, deeply respected by our ancestors. It was thought that their spirits brought sacred knowledge about medicine, and they were revered as symbols of honour and generosity. They were an important source of sustenance too; one legend had a hero releasing buffalo on earth to provide humans with a food source, and Plains Indians believed they gave themselves up willingly as a food source.

Buffalo meat still plays an important role in the diet of Native Americans, but it’s also become widespread in modern society. There was a 104% increase in bison meat sales between 2008 and 2017, and sales now top $400 million annually. Today, the majority of captive buffalo are raised for their meat or fur, and it’s not unusual to see cuts of bison meat on restaurant menus, particularly high-end establishments.

But what does it taste like? Buffalo tends to have a lighter, more delicate flavor than beef; some describe it as being slightly sweeter. It’s high in iron too, giving it a unique flavor that many describe as “earthy” or “mineral.” But it’s not overwhelming, though — bison is not “gamey” in the slightest. That high iron content gives the raw meat a beautiful bright red color and, when cooked, it sears and browns just like beef and doesn’t look any different on the plate. 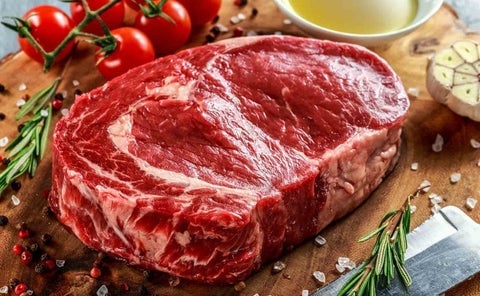 Buffalo steaks are cut more or less identically to the beef steaks you know and love — filet mignon, ribeye, T-bones, and short rib. Filet is, naturally, the most tender, ribeye has the most marbling, and the top sirloin is naturally leaner. Ground buffalo meat for patties are made just like beef burgers, too.

Cooking buffalo is as easy as cooking beef as well. Steaks can be char-grilled, pan-seared, or cooked sous vide – target cooking temperatures for rare, medium-rare, and so on are the same. And you don’t need any special seasoning either – salt, pepper, butter, and a few choice herbs or spices are all that’s required.

We work hard to bring you a great selection of meats, including buffalo, and we’re invested in supporting sustainable, organic farms and producers – such as Land & Farm. Cooking buffalo is neither difficult or expensive, so why not branch out a little when it comes to your next steak dinner? Add some to your cart today and see for yourself how delicious this noble beast really is.