Umami the Fifth Taste, What is Umami? How do you use Umami?

Umami from Japanese 旨味 or savoriness is one of the five basic tastes. It has been described as savory and is characteristic of broths and cooked meats and ketchup!  Umami is a category of taste in food (besides sweet, sour, salt, and bitter), corresponding to the flavor of glutamates, especially monosodium glutamate 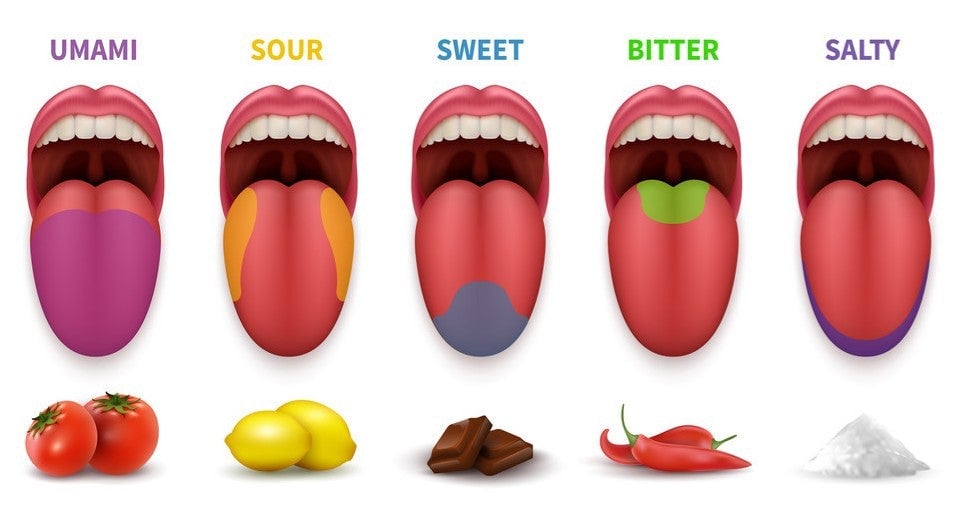 What is the flavor of umami?

Umami (“essence of deliciousness”) may be a Japanese word, but the taste is not limited to Japanese cuisine. You can find umami in foods prepared around the world. 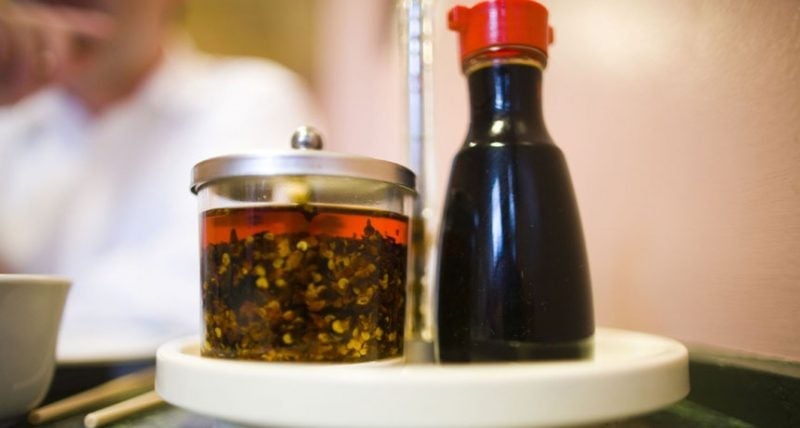 Where around the world can you find Umami?

There is worldwide love of Umami and it is used in every culture.  Western seasonings, such as Worcestershire sauce and ketchup, are full of umami. The Marmite spread and Oxo soup stock that are popular in the UK provide plenty of umami, too. Italian cuisine is rich in umami thanks to tomato, parmesan cheese, anchovies and mushrooms. And so is Bouillon and Consommé in French cuisine. Dried meat, which plays a major role in Mexican and Peruvian cuisine, is a huge storehouse of glutamate, the key ingredient of umami.

In Asia, umami-rich ingredients abound. The fish sauce that is essential to Thai or Vietnamese cuisine or shrimp pastes served with Malaysian or Myanmar dishes are just a couple of examples. Oyster sauce, a thick and flavorful sauce is a popular ingredient in Vietnamese, Thai, and Cantonese cuisine. This sauce is full of umami, and gives any recipe it’s added to an extra flavor boost.

Savory umami flavor is enjoyed by people everywhere. So if you’re craving the taste of umami, there’s no need to search for sushi, tempura or ramen. There’s always plenty of umami within reach. 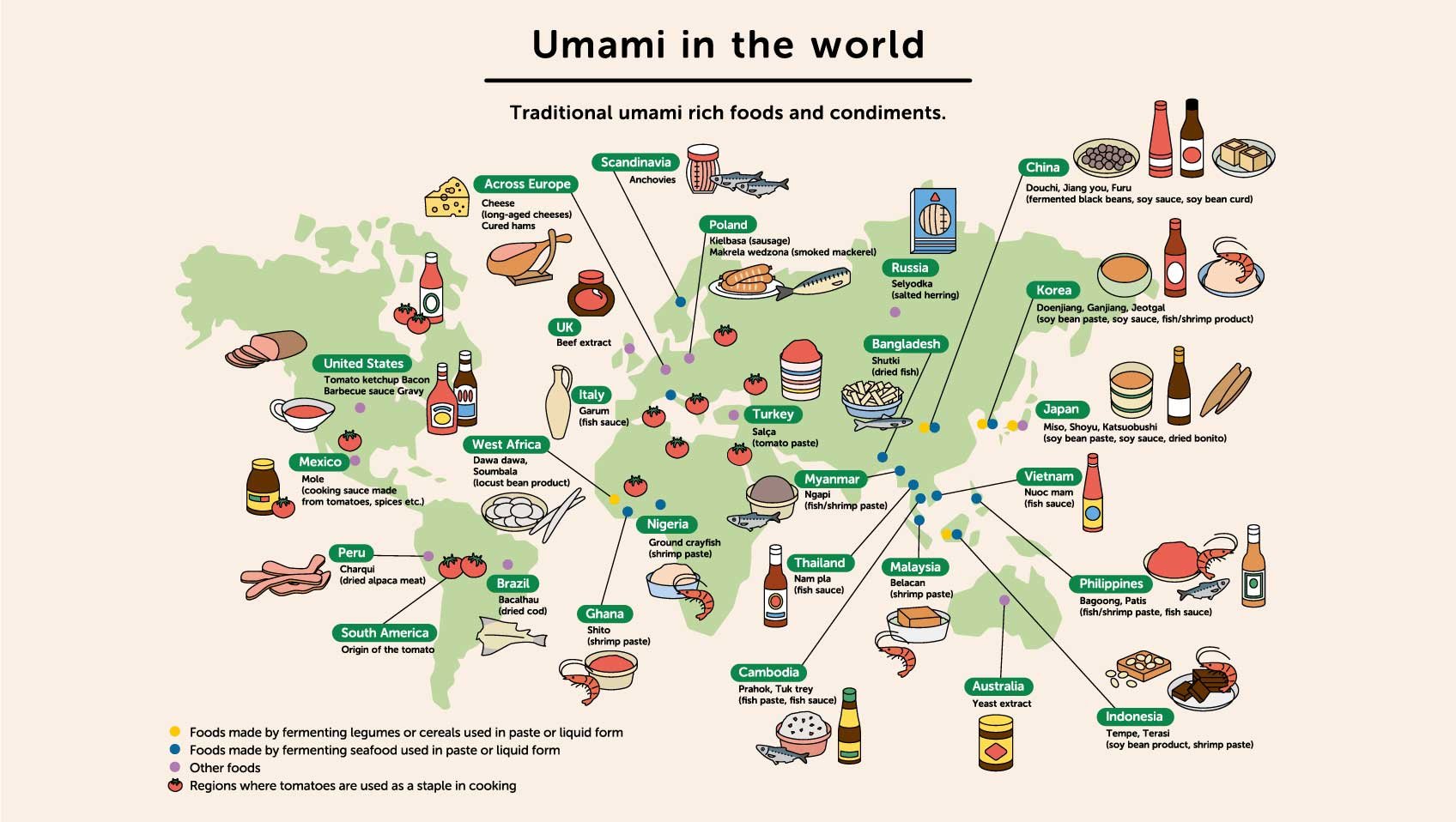 The umami taste is often described as a meaty, broth-like, or savory taste, and is independent of the four traditional basic tastes — sweet, sour, salty and bitter

How would you describe umami?

Umami translates to "pleasant savory taste" and has been described as brothy or meaty. You can taste umami in foods that contain a high level of the amino acid glutamate, like Parmesan cheese, seaweed, miso, and mushrooms.

Is Umami the same as MSG?

The reality is, MSG and umami give us the same taste experience. While MSG has a negative connotation and umami has a largely positive one, they actually use the same molecule—an amino acid called glutamate—to activate our taste receptors

Why Umami is Important?

When was umami discovered and become a taste?

The term umami was invented in 1908 by Professor Kikunae Ikeda, a chemistry professor at Tokyo Imperial University who later co-founded Ajinomoto, now a household brand of monosodium glutamate (MSG). Umami is the common deliciousness found in savoury foods like fermented soy products, cheese, and shiitake mushrooms. English-language approximations usually refer to a savoury, meaty or “full” taste. Kikunae Ikeda, the Japanese chemist and Professor of Chemistry who discovered the umami taste and later founded the Ajinomoto company that now offers a wide range of seasoning products.
The original idea of researching on glutamate occurred to Ikeda when studying  in Leipzig, Germany from 1899 to 1901) he found that there was a quite peculiar  taste common in tomato, asparagus, cheese, meat, etc. Ikeda recognized that there were four well-defined taste qualities, sweet, sour, salty, and bitter. After returning to Japan and tasting again the traditional soup stock dashi made from dried seaweed konbu (Laminariaceae Bory), he realized that dashi hold the same taste he had experienced in German foods. As a result, he began a study to identify the key chemical component in konbu responsible for this unique taste. After a long chemical process, Ikeda isolated glutamic acid from konbu.
In 1990, however, umami was finally recognized as a distinct fifth taste at the International Symposium on Glutamate. In 2006, University of Miami neuroscientists were able to locate the taste-bud receptors for umami, further validating the existence of the fifth taste.

What is the story of veal stock and umami?

In the late 1800s, the “king of chefs and chef of kings”, Auguste Escoffier, discovered and noted the unique character of umami, when he developed his famous veal bone stock. The exquisite dishes he enriched with the stock had a new quality – one that was deep, rich, and could not be described as salty, sweet, sour or bitter. Although he couldn’t fully articulate this new taste, causing French scientists to diminish his discovery, Escoffier knew he had stumbled onto something important. Well-heeled Parisians thought so too, flocking to the Ritz Hotel in droves to experience his dishes for themselves. 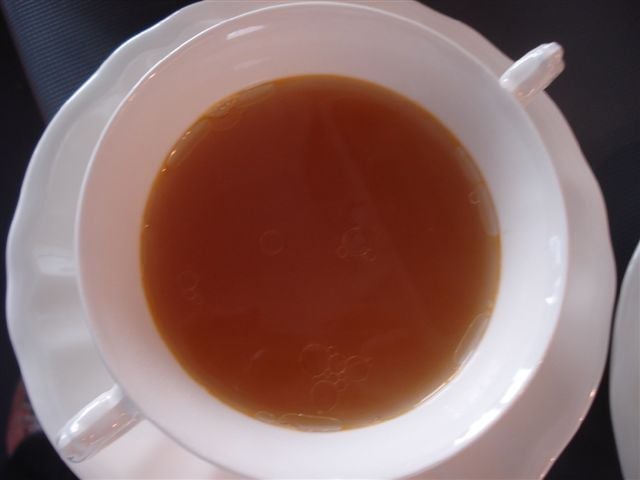 How Do You Extract Umami?
Age-old processes like dry-ageing, curing, smoking and fermentation are all ways of turning relatively bland food items like raw beef, pork, salmon, dairy milk or soy beans into umami bombs like iberico ham, smoked salmon, cheese and soy sauce. Even the everyday process of cooking meat contributes to the development of umami - compare, for instance, the taste of a pan-seared steak with a traditional steak tartare.

Umami can also be achieved through the right combinations of ingredients. Even the most low-brow of foods like a ham and cheese sandwich packs a massive umami punch with minimal effort by combining simple ingredients in umami-enhancing ways.

Is Avocado a umami?

This is usually the taste of glutamate, which is an amino acid found in foods like meats, dairy, fish, and vegetables. An avocado definitely does not fit into any of the other categories, and umami is the closest category I could find that accurately encompasses the very mild flavor of an avocado.

Is coffee a umami?

Umami is a taste that comes from glutamate, an amino acid absent in coffee.

Can you smell umami?

Is bacon a umami?

Bacon is addictive. It contains umami, which produces an addictive neurochemical response.

Worcestershire sauce is really an umami delivery vehicle, a cousin to fish sauce or soy sauce that the family kind of forgot about. And we tend to forget about it, too—but at the end of the day, you can use Worcestershire to add flavor to anything saucy much in the same way you'd use soy or fish sauce

How to add umami to your cooking?

Is ketchup a umami?

It turns a soup from salt water into a food.” When Heinz moved to ripe tomatoes and increased the percentage of tomato solids, he made ketchup, first and foremost, a potent source of umami.

All mushrooms are a rich source of umami and the darker the mushroom the more umami it contains. Widely available mushrooms with the most umami:

Dried mushrooms tend to have more umami than fresh ones, and cooked mushrooms are more umami-rich than raw. This means that adding mushrooms in virtually any form—raw, sautéed, whole cap garnish, even a dusting of dried powder—will add an umami lift to foods. 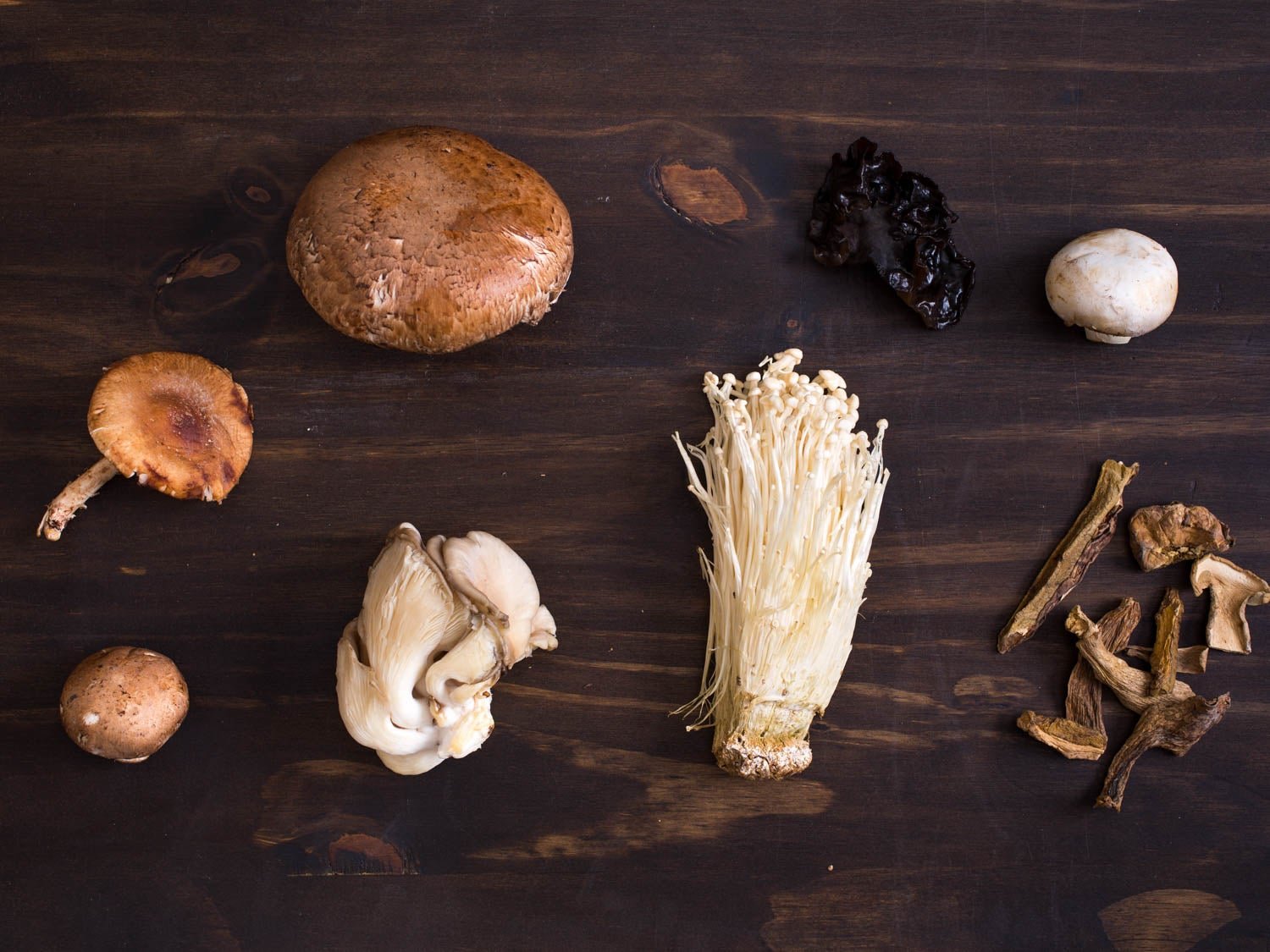 Many types of seafood are high in umami compounds.  Seafood can naturally contain both glutamate and inosinate — also known as disodium inosinate. Inosinate is another umami compound that is often used as a food additive

Tuna is found in oceans worldwide, and is enjoyed everywhere. As well as being eaten as sashimi and in sushi, it is also famously processed and sold in cans. High levels of inosinate are found in the red flesh of the fish.

The sea vegetables wakame and nori has been a part of the Japanese diet since ancient times.  Nori is the Japanese name for an edible seaweed species of the red algae genus Pyropia including P.vezonensis and P.tenera.  Thin film-like nori is cut into small pieces and dried into sheets.

Mackerel is a strong flavored fish enjoyed all over the world.  It is more often than not cooked in some form, such as smoked, vinegared, salt-grilled and simmered.  This is contrasted with Cod, the taste is subtle. Decomposing of inosinate is faster than in any other fish. It is often cooked with other flavours, for example in simmered dishes. It is also often fried, such as in the British dish fish and chips, and the Fillet o’Fish burger

Sea Bream, a versatile fish, can be prepared in numerous ways, including as sashimi, salt grilled, simmered, marinated in kombu, baked in casseroles and mixed with cooked rice. Because the inosinate contained in sea bream does not readily break down, it offers an umami rich taste.

Oysters are in season during autumn and winter, and during this time the umami levels are increased. Such is the level of nutrients they offer that oysters are sometimes referred to as the ‘milk of the sea’. As well as containing amino acids they also offer high levels of zinc, and can also help enhance your sense of taste. Raw material for Chinese seasoning, oyster sauce.

Anchovies are filleted, salted, matured then marinated in olive oil or sunflower oil. While the inosinate is decomposed and disappears during this period, the protein is decomposed by maturation into amino acids such as glutamate. Thus, it becomes a umami-rich food. It imparts saltiness as well. A small amount of anchovies in Italian cuisine such as pasta and pizza enhance umami and enrich the taste of the dishes

Niboshi are small sardines that have been boiled and then dried. The most popular ones for niboshi are anchovies but other small fish such as sardines are also used.  Sardines are abundant in unsaturated fatty acids such as DHA and EPA, this fish has long been treasured around the world as an important source of nutrients. Particularly famed are the olive oil marinated and salted anchovies found in Italian and Spanish cuisine. For a long time, they have been combined in Italy in Spain with tomatoes, which are also rich in inosinate, in dishes such as pizza, pasta and paella, while in Japan they have featured in tsumirejiru,soup with fish dumplings).  These are all quintessential umami rich dishes from East and West.

Shellfish are a variety of soft bodied, shelled sea creatures, including clams, scallops and mussels.  All are rich in nutrients, including taurine and calcium. In particular, scallops contain high levels of a number of various amino acids, and are used in a wide range of cuisines such as Japanese, Western and Chinese, as a rich source of umami.

Shrimps and prawns contain an amino acid called glycin, and this, combined with glutamates and inosinates, serve to create a unique umami taste. South East Asia is home to a number of fermented seasonings made from shrimps and prawns, all of which are rich in umami.

Octopi can change the color of their bodies depending on the environment around them using pigment cells on the surface of their bodies.  In addition to glutamate, octopus contains other umami compounds such as adenylate . Cooking together with ingredients rich in glutamate, such as tomatoes, creates a synergistic effect.

Hamachi or Japanese amberjack, Migrating seasonally along the Japanese coast, the buri in winter are known as “kan-buri.” They are fatty and delicious. These fish are rich in unsaturated fatty acids. Hamachi (buri) contain a lot of inosinate, an umami compound 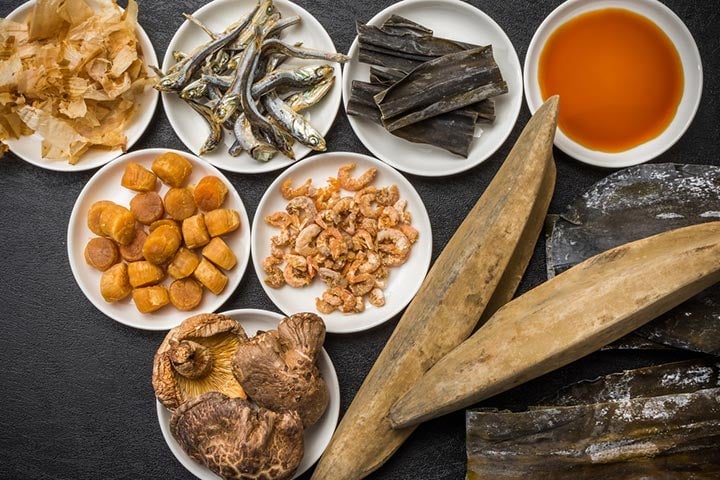