Why Grapefruit is One of the World's Healthiest Foods

The super-sour member of the Rutaceae family that looks like an oversized orange on the outside, but uniquely pink on the inside, the grapefruit is the citric fruit most commonly found at the breakfast table and in a wide variety of juice products. Whether you squeeze it yourself, for a slightly sour pick-me-up, or simply dig in with a teaspoon to go alongside your buttered toast and black coffee, grapefruit is an acquired taste but offers no shortage reasons why you should eat it. Beloved by fitness experts as a revitalizing source of natural sugars and illness-preventing vitamin C – in fact, just one medium-sized grapefruit is enough to satisfy your body’s entire daily vitamin C requirements – each one contains just over 80 calories per serving, as well as more health benefits than there are hairs on your head.

Well, that’s a slight exaggeration, but the point is that grapefruit is the superfood you need to be fitting into your diet more regularly. With properties known to protect the body from stroke and heart disease, as well being something of a celebrated dietary aid, grapefruit is the fruit that can be a little hard to love in your first few servings – but once you learn to like its sharp, slightly bitter taste, you'll never look back. Here’s what you need to know about the brightly colored citric fruit with the distinctive taste, and how you can enjoy more of it in your diet.

What are the benefits of eating grapefruit?

Loaded with naturally occurring plant compounds known as flavonoids, which protect your heart against the risk of strokes, grapefruit also comes with plenty of beta carotene, which is itself a great source of vitamin A. This one is ideal for young and old alike, as vitamin A has been known to reduce the severity of acne, thanks to its high concentration of antioxidants, as well as protect your eyes from age-related degeneration. There is also good cause for taking the more hands-on approach and peeling your grapefruit like an orange, eating the segments one by one rather than scooping everything out with a spoon, which is how grapefruit is usually consumed.

This is because, when you eat the segments whole, you will be consuming a higher volume of the grapefruit’s healthy fiber-laden membranes. In particular, you will be ingesting a greater volume of pectin, which is also known as “viscous fiber” and aids the body in lowering level of LDL cholesterol, which is the ‘bad’ kind of cholesterol. Not only that, but pectin has also been known to stimulate production of healthy bacteria in our gut, in turn aiding digestion to prevent stomach cramps and acid reflux. 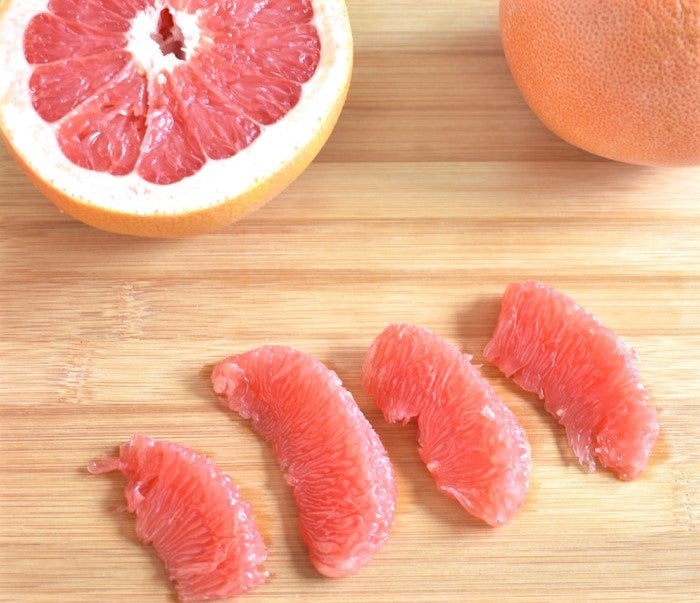 Otherwise, the most common way of eating grapefruit is by slicing it in half with a knife and then digging in with a spoon – but it’s advised that you actually rinse the two halves briefly as some of the bacteria which has collected on the rind of the fruit may have been pushed into the fruit while being cut in half. Beyond that, it’s also advised that you don’t refrigerate your grapefruits – unless you’re keeping it fresh if recently sliced in half – and instead eat them at room temperature, as this allows for a more flavorsome experience.

Can grapefruit help me lose weight?

As with all foods that purport to be the miracle of weight-loss diets – a good example of this being the myth that eating celery burns more calories than you consume – you should herald the grapefruit’s reputation with a pinch of salt. While it can certainly aid weight loss within strict parameters, grapefruit alone isn’t the ultimate solution: it should be incorporated into a healthy, varied diet and plenty of regular exercise. Nonetheless, grapefruit is believed to minimize belly fat, thanks to it influence on metabolic syndrome, and can also keep cholesterol at a stable, healthy level.

Another positive to grapefruit is its juice, which is not only a fructose-laden source of energy, but its strong, tart flavor prevents many people from being able to swallow large quantities of it in one go. This means they drink it more slowly drink it and thereby feel full with a reasonably low ingestion of calories. Consuming less to achieve a feeling of fullness is the key to dependable weight loss, and this is why grapefruit may have enjoyed the reputation it has. 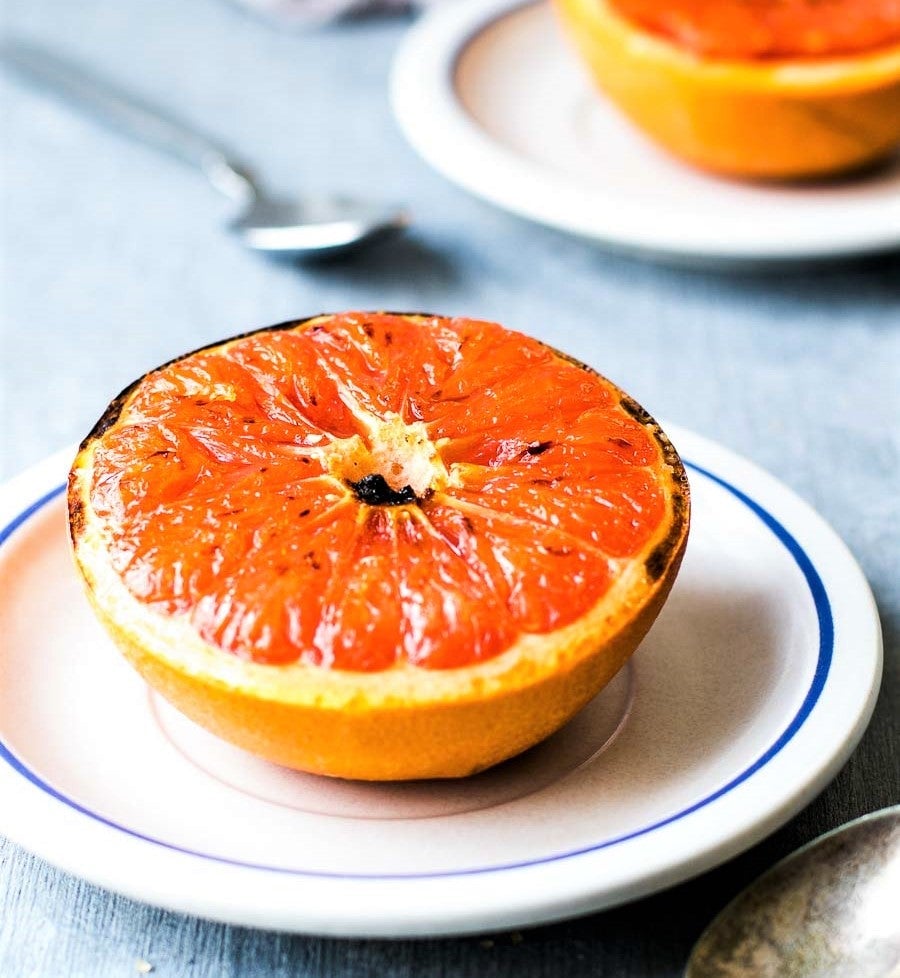 If you want to try putting more grapefruit in your diet, but want a snacking experience a little more bespoke than just juicing it or digging a spoon inside one half of it, then why not try grilling it? The trick here is to slice a grapefruit in half and then lightly caramelize the flat exposed top, with the best options being for you to sprinkle brown sugar over it or choose between honey or cinnamon for similar effects with different tastes.

First, preheat your grill and slice the grapefruit in half; then loosen the segments slightly so they can be easily extracted later. Sprinkle a teaspoon of brown sugar over the flat half of the grapefruit and then place under the grill for about eight minutes, until the sugar begins to bubble a little bit and turn brown. Then, simply serve up and enjoy while warm! A dollop of Greek yoghurt is an especially delectable addition to this easy breakfast item, as its inherent creaminess prevents it from becoming too runny as it begins to melt over the warm grapefruit.

Grapefruit really is the overlooked superfruit, so you shouldn’t let its sharp taste push you away from such a good thing. If this has gotten you in the mood for some delicious, crisp, and ripe-off-the-vine fruits, then you’re in luck. All year round, Buffalo Market stocks only the very best organic produce the instant it comes into season, and all sourced from small-scale independent farmers in California. We take priding in giving you the freshest ingredients without a single preservative in sight.

Delivering market-quality produce direct to your door, Buffalo Market makes it easy for even the most skeptical chefs to make the move to a more vibrant, organic lifestyle. With over 2,600 items to choose from, in an inventory that rolls with the seasons and is constantly being updated, why not see what takes your fancy and enjoy fresh, ripe, 100% natural goods at the most competitive prices.