Marin Cheese Company was founded by Reno Rossi and his uncle Ralph Salvemini in 1982. Both worked for Monterey Cheese Company, which set the standard for how cheese would be distributed throughout northern California. Monterey spearheaded many trends that would later migrate across the country and change the industry forever. It is only when Monterey was purchased by General Foods that the two founders would set off to start their own business.

Monterey Cheese Company’s original focuses of Quality, Service and Price became the foundation for the business model that would later become Marin Cheese. Reno’s wife Pat is credited with developing the name while both families were sitting around the kitchen table deciding what to name the company…and how to pay their bills! It was a true American dream that all began with two men and one truck.

Marin Cheese purchased its’ first small 1,200 sq. ft. warehouse located on Anderson drive in San Rafael soon after incorporating. The company quickly grew and hired an employee to drive truck and another to run the office. 12 years later the company would move to an 8,000 sq. ft. facility on Carlos Drive which it would call home for the next 12 years. In 2005 Reno purchased the other half of the company from his retiring uncle Ralph. It wasn’t long after that Marin Cheese moved to its current location, a 34,000 sq. ft. warehouse located at 63 Paul Drive in San Rafael.

Marin Cheese is a true family run business. The General Manager and Controller is Reno’s son Marcus. His two son-in-laws Zac Ciolino and Lincoln Green manage the sales staff. Reno’s daughter Alicia, who was the leading salesman for the company for many years, previously managed the sales department and now serves as a full time mom. Finally, Reno’s other daughter Sabrina serves as the human resource manager while also performing her full-time motherly duties and even part-time teaching. 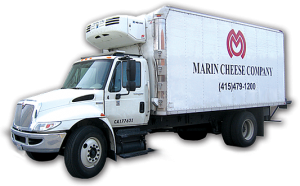 Marin Cheese is a uniquely situated company in that we choose to only cater to the independents. The roots for this decision can be traced back to Reno’s parents who opened the first ever supermarket in San Francisco, Rossi’s Market. Thanks to this background Reno understands first-hand the stresses faced everyday by the independent. Such as the need to have great quality product at a competitive price in order to compete with the likes of national chains like Safeway™ and Costco™. Marin Cheese is proud to say that we have not only accomplished this goal but have forced the mega stores to worry about their neighborhood competitors.