Every business has to start somewhere. We’re often flooded with stories about the ‘overnight success’ of brands, but the reality is that it often takes humble beginnings and years of hard work to climb your way to the top.

Have you ever wondered how they do it?

We’ve delved into some of the biggest consumer packaged goods (CPG) brands in the States, to uncover their startup stories and what it took for them to become a household name. 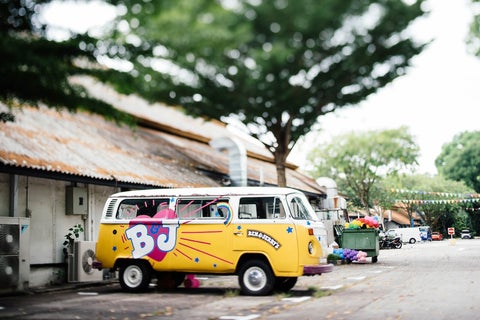 The beloved ice cream brand was founded in 1978 by — you guessed it — Jerry and Ben.

Ben Cohen and Jerry Greenfield were childhood friends from Long Island. They met in 7th grade, being the 2 slowest kids in gym class. A few years and a $5 correspondence course in ice cream-making later, they opened their first ice cream parlor. It took a $12,000 investment to open their scoop shop, which was a renovated gas station in Burlington, Vermont.

Can you guess what their first flavor was?

With the success of their pioneering shop, they decided to start packing the ice cream into pints and distributing it to local Mom & Pop grocery stores. Word was starting to spread, so in 1981 they opened their first franchise in Shelburne, Vermont.

They’re pretty good at getting people talking. In 1983 they built the world’s largest ice cream sundae - weighing in at a whopping 27,102 pounds. More and more franchises popped up and more retailers began stocking the product.

There was one rather seemingly large inconvenience for the duo. Ben has a condition called anosmia — meaning that he can’t smell or taste anything. How does one build one of the most successful and delicious ice cream brands in the world without being able to taste their product, you ask?

He relies on ‘mouthfeel’ when creating the unique ice creams. Hence the signature chunks you find in the iconic dessert. Turns out this huge ‘obstacle’ was actually one of the reasons why the CPG brand rocketed to success.

Another hurdle arose as retailers began to stock the dessert. Their major competitor Häagen-Dazs felt threatened.

It worked a treat and retailers continued to sell the ice creams side by side.

The environmentally friendly, non-toxic soap brand was established by co-founders Eric Ryan and Adam Lowry in the year 2000.

Eric got the taste for entrepreneurship early on. He’d go into work with his dad, who had his own machine and stamping business. While most are weary of physical product design and manufacturing, it’s Eric’s favorite part.

He searched for a tired industry which was ripe for disruption. Soap has always been something that’s hidden in homes due to its ugly design. It’s also not great for the environment and at the time, there weren’t many fragrance options.

When they launched, there were far less conscious consumers than there are today. One of the ways in which they attracted their customers was by playing on the narcissistic side of human nature. They made something that people would want to use to decorate their homes and make them smell nice.

Then they’d eventually notice on the label that it was also good for the planet and better for their health, which would then drive repeat purchases.

Investors were hesitant at first. The founders heard the same typical responses that will be familiar to many CPG brands; ‘it’s not defensible against copycats’, ‘why hasn’t it been done before?’, ‘it’s easy to have a good idea, it’s hard to execute’.

The way they made it defensible was by building their brand around philosophies, not the product. If copycats were to bring out a sustainable, aesthetic soap, they’d need to build a brand from scratch. According to Eric, even if a competitor tried to copy Method too closely, it wouldn’t work; ‘Consumers will give you permission for knocking off products. They won’t give you permission for knocking off brands.’

Their estimated annual revenue is a squeaky-clean $135 million.

Founded in 2012, this company is responsible for Halo Top. The guilt-free, low-calorie ice cream that has won over the hearts of foodies and gym junkies alike.

Justin Woolverton began his career as an LA cliché — a burned out lawyer/screenwriter/comedian who was practicing intermittent fasting.

He was dedicated to a healthy lifestyle, but he could not satisfy his craving for ice cream. With plenty of trial and error, he finally concocted a healthy, sweet-tasting recipe that stirred up an entrepreneurial spirit within.

So, he taught himself the ins and outs of how to make ice cream at scale and get it into stores. He invested $30,000 into the logo and packaging design, with an additional $100,000 into ingredients and everything else needed to make ice cream.

Justin initially got his ice cream into Erewhon, his local gourmet grocery store. It didn’t take him long to score a meeting with Whole Foods, who put in a tasty order of 225 cases — without even trying it!

It was difficult to convince subsequent retailers to stock Halo Top. Healthy ice cream didn’t sound too appealing. Most stores didn’t even consider signing the CPG brand until they had tried it for themselves.

When they did manage to get it into stores, stocking fees were crippling them. Justin and his new partner Douglas Bouton got themselves into hundreds of thousands of dollars of debt, which they crawled out of by raising a funding round from angel investors.

To save on expensive costs such as in-store demonstrations, they opted to instead invest into hyper-focused Facebook ads, which would then drive customers into stores. This tactic got the product in front of far more potential customers, both virtually and physically.

Halo Top is now one of the best-selling ice creams in the States, making a delicious $350 million in annual revenue.

Starting out in 2009, Beyond Meat is turning the vegetarian and vegan industries upside down with its revolutionary meat substitutes.

Growing up, Beyond Meat’s founder Ethan Brown was a carnivore. His family owned a farm in Western Maryland and he genuinely loved eating meat. Like many vegans, he switched to plant-based due to both a love of animals and a concern for the environment.

Through research, he determined that the composition of meat can be found in plants. Animals act as a bioreactor, converting plant matter into muscle. So, he decided to find out how we can do that without using animals.

Before Beyond Meat was established, Ethan would import a soya-based food which closely resembled meat from Taiwan. He would then sell the product into Whole Foods stores. To this day, he attributes much of his success to this initial relationship.

When the faux-meat products were ready for retail, Whole Foods were the first to take stock. It quickly took off and people were astounded by the products’ likeness to real meat.

Ethan describes himself as his own worst critic. He openly talks about how the product does not yet replace meat for exactly what it is. He wants to create meat, not just a vegetarian product that kind of looks like meat.

They also have to compete with others attempting to do similar things. Impossible foods genetically engineer their molecules to look and taste exactly like meat. Memphis Meats is using harvested animal cells to grow “clean meat” in a lab. Ethan insists that his main competitor is still the animal meat industry itself. 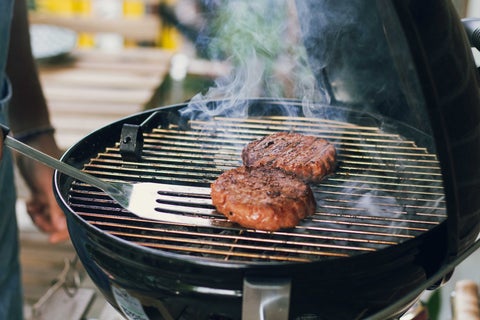 The wellness brand Health-Ade Kombucha launched in 2012. Today it dominates the fermented-tea market.

Inspired by a love of nutritional science and its effect on health, Daina Trout would experiment with her food and found herself making better-tasting Kombucha than she could find in stores. She recruited her husband and her best friend as co-founders to have a go at selling the drink.

Diana had a contact at the Brentwood Farmers Market. This was her ‘in’ to have her first taste at selling the drink. With a bit of DIY, they taped some labels onto bottles and hit the stands. Within 1 hour they sold out.

All summer long the 3 would work their way around the market, handing out free samples to attract more people back to their stall.

They eventually got their kombucha into some smaller retailers, but they wanted to break into a bigger chain. The team pestered Erewhon Market over 10 times before they finally gave in, allowing the brand to sell a small amount of stock in their store.

There seems to be a recurring theme in the early challenges faced by these CPG startups. All 3 founders had quit their jobs and found themselves in debt. They were even evicted from their apartment for running a business out of it, plus the stench of fermenting Kombucha didn’t help. But they were determined to make this business work.

They would deliver the products in their personal cars, unable to find a distributor who was willing to take them on until they signed with a bigger chain. They persisted and finally managed to sign Gelson’s. Their Kombucha sold well, they got their distributor and the rest is history.

The brand is generating over $150 million across 30,000 stores. They’re a long way from their smelly apartment.

If you’re looking for help in getting your grocery brand stocked into retailers, big or small, we’re here to help. Buffalo Market is the leading distributor for purpose-driven food and beverage brands in the Bay Area.

Get in touch today via email: info@buffalomarket.com