Some still express surprise, or even shock, that people eat buffalo (and that it’s even widespread). But whether it’s water buffalo in Asia and the Indian subcontinent, or the revered, noble bison that wander the great American plains (and from which we take our name), these animals have long been a source of sustenance. So yes, buffalo meant is very much edible – it’s America’s original red meat.

And not only that, but it’s both delicious and nutritious. There are, of course, many similarities to beef, but buffalo meat has its own, special characteristics (not for the nothing have the Native Americans been hunting buffalo for centuries). Over the last 20 years, it’s enjoyed something of a renaissance, and now regularly appears on high end menus and premium supermarket shelves. There are still a few myths and mistruths surrounding buffalo meat though – luckily, we’re here to help. 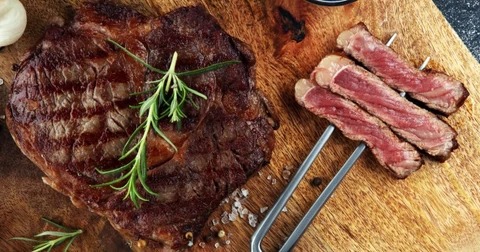 Is Bison Healthier Than Chicken?

In short, yes it is. And don’t take out word for it – a study conducted by South Dakota University found that bison meat has even less cholesterol and fewer calories than chicken. The USDA agrees. And partly this is due to the free-range, organic nature of how bison are reared. Grass fed, and able to roam, their high nutritional value is due to the unique freedom bison enjoy on farms.

Is Buffalo Meat Better Than Beef?

It depends how you define “better”. There’s no doubt buffalo is healthier – it contains 40% more protein, yet significantly less fat and calories. Buffalo is also an excellent source of of iron, zinc, phosphorous, niacin, selenium, and vitamins B6 and B12, and  providing all nine essential amino acids your body needs for growth and maintenance.

Bison and beef have a similar flavor – in many dishes, it’s difficult to tell them apart – but the taste and texture very much depends on the cut of meat and preparation method. Bison has a lighter, more delicate flavor than beef, and has been described as slightly sweeter. It’s high iron content can give it an “earthy” taste too, but it’s not overwhelming.

Due to their versatility bison and beef can be prepared similarly - both are eaten as steak, or ground for use in burgers, meatballs, chili, and tacos. But because bison meat is so lean, it cooks quickly and becomes tough if cooked for too long or at too high a temperature (chefs often recommend cooking bison steaks to no more than medium).

Why Is Bison Meat So Expensive?

Bison is not commercially farmed in the way cattle beef are, with most being grass-fed and raised in an organic, free-range setting. Furthermore, because of federal laws and industry regulations, most bison meat sold in the U.S. is also raised without antibiotics and hormones. As such, it’s a more sustainable meat choice than beef, but costs are naturally higher, making it more expensive.

Bison take longer to produce too, maturing around 24 months (cattle mature between 15 and 18 months). And because it’s all done on a much smaller scale compared to traditional cattle ranching, costs cannot be scaled in the same way, leading to a pricier (but better quality) product.

Can You Eat Buffalo Meat Raw?

There’s a reason steak tartare is such an exclusive – and expensive – dish; it tastes amazing, but can only be prepared with the best, and freshest, cuts of meat. And while the USDA recommends all rare bison steaks be cooked to a minimum of 145°F before consuming, buffalo can be eaten raw (there are numerous recipes online for buffalo tartare).

Even more exotic is buffalo liver, the life-saving sustenance that saw Leo DiCaprio’s character survive the harsh northeast in The Revenant (reports suggest the actor ate raw liver for real, take after take). Raw buffalo liver is actually extremely healthy – you’d get complete amino acids and a huge hit of carbohydrates – although it might be slightly harder to come by than traditional cuts and steaks.

We work hard to bring you a great selection of meats, including buffalo, and we’re invested in supporting sustainable, organic farms and producers – such as Land & Farm. For a healthy, nutritious red meat, add some to your cart today and see for yourself how delicious this noble beast really is.