The History of the Tortilla

Who doesn't love a tortilla? From tacos to burritos, enchiladas to quesadillas, they’re one of the most versatile foods around — they’re even delicious on their own! But chances are, you’re eating tortillas without ever thinking about where they came from.

So what is the history of the tortilla? Where do they originate from and how did they become such a staple of Mexican culture, heritage, and food?

Grab the salsa and guacamole, and let’s dive right in!

Tortillas aren’t exactly a new invention. While the name dates back to 1600, the concept of a flat, round cornbread has been around since 10,000 BC in Mexico –– when corn was first domesticated in the area.

Mayan legend says that the first tortilla was actually made as a gift for the king. Over 12,000 years ago, a peasant invented the corn tortilla as a present for his hungry king, and from there it grew in popularity and became a staple in Mayan and Aztec diets.

But they weren't just eating plain corn tortillas all day. During Aztec times, corn tortillas were usually dipped in a chili sauce or stuffed with meats, beans, squash and other ingredients.

Sounds familiar right? Yep, the ancient Aztecs were eating chips, salsa and burritos. From there, tortillas became the basis of many traditional dishes, especially in Mexican culture.

How tortillas took over the world

It wasn’t until over 10,000 years later that the rest of the world got a chance to try out these delicious corn creations. When Spaniards arrived in Central America in the 1500s, they were pretty impressed with the local-favorite tortilla.

Spanish conquistador Hernán Cortés wrote a letter to the Spanish King Charles V in 1520, sharing his love for the street food markets, and the wide variety of corn-based food available.

At this time, corn flatbread was called tlaxcalli in the native language. The Spanish dubbed them tortillas and brought them home to Europe.

What does ‘tortilla’ mean?

But tortillas aren’t just Spanish! In some parts of southern Spain, tortillas are made from chickpeas and fried until crispy. They look similar to corn tortillas, but actually originated in Greece, and were brought to Spain by Arabs hundreds of years ago.

The corn tortillas we know and love started out in what we now call Central and South America, and Spanish conquerors brought them to the rest of the world.

So where do flour tortillas come from?

Corn always has always been a staple of South and Central American cuisine. It grows there in abundance and has influenced a lot of the traditional native dishes.

But when Spaniards brought wheat crops over from the New World in the 1500s, a whole new method of making tortillas was born. 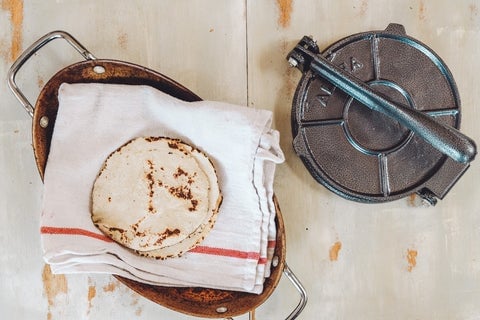 How do you make corn tortillas?

Up until very recently, tortillas were made exclusively by hand. Corn kernels are soaked in lime water to remove their skin, and are then ground into a dough called masa. The masa is divided into golf ball-sized lumps, which are flattened by hand and cooked on a hot grill.

Growing population and huge demand forced manufacturers to turn to mechanized tortilla making in the mid-20th century. One of the first widespread uses of electric motors and gas engines was to provide power to wet-grain grinders, which made the masa. But people still had to flatten and form the tortillas by hand.

By the 1960s, the process was fully automated –– small-scale machines were capable of producing cooked tortillas every two seconds.

Tortillas have come a long way!

From their humble beginning as a peasant gift, tortillas have definitely climbed their way up to be one of the most popular and widely-eaten foods out there. Research suggests that the average Mexican consumes 80kg of corn tortillas a year (that’s around 800 total!) and in the US, we consume our fair share too: around 120 million annually.

Enter next: the specialized tortilla-making machine, capable of producing 60,000 cooked tortillas in an hour! The mass production of tortillas has only inspired the world’s love affair to reach new heights, making tortillas more popular than bagels or muffins in America –– second only in the baked good aisle to sliced bread.

Overall, tortillas (and corn chips and taco shells) are a $6 billion-dollar-a-year industry today.

Tortillas are (literally) out of this world!

Eating toast in space isn’t really feasible –– the combo of crumbs and anti-gravity don’t really mix. Since 1985, NASA has supplied tortillas to astronauts in space as an easy and mess-free way to enjoy meals while floating around up there.

They invented shelf-stable tacos which don’t grow mold, by removing all oxygen from the packet before sending it up into space. 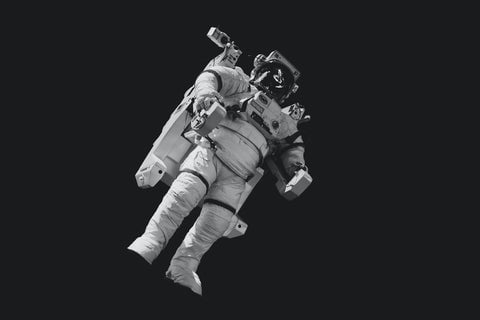 Are you hungry now? We’ve actually rounded up some of the very best tortillas on the market, that will help you create the delicious Mexican feast of your dreams. Check out our round-up of the best store-bought tortillas and start cooking!