What is Meat-Free Monday?

The start of a new year is usually when people decide to make some great change for the better: they might vow to start running again on January 1st, or read more books every month, or maybe get adventurous in the kitchen with a more diverse meal plan. That same line of thinking applies to every new week, with many people using the first work day as a chance to do a reset on some of the indulgences incurred over the weekend. This is the philosophy behind Meat-Free Monday, whereby people are encouraged to replace their consumption of meat-based products with plant-based alternatives once a week.

Launched in 2009 by former Beatle and world-famous vegetarian Paul McCartney, with his daughters Mary and Stella, Meat-Free Monday is a not-for-profit striving to raise awareness of the damage caused by industrial farming and meat supply. Just as people will hit the gyms on Monday to counterbalance a boozy Saturday night or “cheat day” Sunday feast, the McCartneys want their campaign to be treated in the same way: balance out your consumption of meat with plant-based alternatives on Monday. If starting the week is a struggle for some, at least you can do your bit to save the planet when you do.

With the simple move to going meat-free just once a week, there are many reasons why Meat-Free Monday should be considered within your meal plans – but it doesn’t need to just be on a Monday. Here are some of the most important things to help you change your mind when it comes to what you put on your plate.

Food production is a significant contributor to global warming, due to the resources consumed in transporting food products around the world, as well as the water and other resources needed to feed the cattle and poultry we consume ourselves. Millions of acres of trees are cleared to rear cattle, with 80% of the Amazon rainforest being cleared for the purposes of cattle farming; more broadly, almost 30,000,000 acres of forest is wiped out every year to accommodate the food industry.

The greater levels of carbon dioxide that goes into the atmosphere, with fewer trees to convert it into oxygen, is a problem compounded by the reduced amounts of biodiversity that occur as land is cleared. This exacerbates the issue of food insecurity, which has not been as closely addressed as it should be: of the approximate $400 bn invested annually to try and reduce greenhouse gas emissions, only $2 bn is channeled toward rainforest preservation and replanting.

Billions of animals are bred into existence each year simply to slaughtered shortly thereafter. Many of these birds and cattle are reared in factory farms with next to no freedom to move around, in pens and cages that are often far too small to accommodate the volume of animals inside them. This lack of space, as well as the minimal exposure to natural light and high levels of noise in these confined spaces, creates an intensely agitating environment that often leads the animals to attack one another. As a result of this, animals reared in captivity will have their beaks clipped or singed to prevent them pecking or lashing out in response to the stress of constantly being wing-to-wing against one another.

This violent, uncomfortable existence is ultimately cut short in a slaughterhouse, making the move toward a less meat-based diet cuts down on the demand for beef and poultry products. Reduced demand equates to a downturn in the number of animals bred for slaughter, mitigating the degree of suffering to which they are subjecting within their brief, fraught lifespans.

Animal rearing is far from an energy-efficient process, with the yield of meat protein produced often greatly outweighed by the amount of energy and plant protein required. It can take as much as 12 kg of grain in cow’s feed to make just 1 kg of beef product, which means that eating beef is really costing the earth a lot more than the few dollars you pay at the grocery store. In fact, a lot of nutrients that go into feeding the cattle aren’t passed down into the consumer, making the process of animal rearing costly as well as an inefficient.

As it stands today, over 800,000,000 people in the world are suffering famine and malnutrition, but the amount of basic cereal needed to satiate the hunger of three times that many people is instead funneled into the feed bags of pigs, chickens, and cattle. Moving away from meat-based products can help redivert attention to the world’s neediest and most disadvantaged citizens, as the downturn in demand for meat reduces the need for resources sustaining it. 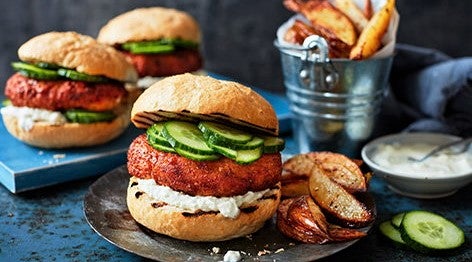 Operating across the planet in 45 unique campaigns, Meat-Free Monday has expanded far beyond its point of origin in the UK. Better known as Meatless Mondays in the US, the idea of skipping meat at the start of the week is an endearingly popular idea. With the rise of plant-based meats in restaurants as products more closely resemble the beef or poultry products they’re substituting, many consumers are making the change today to a more sustainable and environmentally conscious diet.

At Buffalo Market, we’re committed to sustainable eating as well, with a wide range of meat-free products to accompany our expansive inventory of fresh, natural ingredients. Offering products from some of the most popular meat-free suppliers of the moment – such as Lightlife and Beyond Meat, producing sausages and burger patties that taste just as good as anything you could get from your local butcher – we can help you make the move to meatless by delivering to your door.

Beyond that, if you wanted to serve up those burgers with some of the juiciest tomatoes, the crispiest organic lettuce, and the tangiest red onion in the state, Buffalo Market is on hand to give the ripest and most flavorsome organic produce from local, small-scale farmers. Take a look at the 2,600+ items we have on sale and see how a fresher, more colorful diet can make all the difference.