What does Fairtrade actually mean?

There are plenty of things we understand as good without quite knowing why. We know it’s ‘good’ to ask for salad to go in your burger, and it’s a commonly accepted fact that eating your 5-a-day assists in overall physical wellbeing. Sure, you can find out why that is exactly, but the basic truth is that an apple will be ‘better’ for you than a candy bar. Similarly, we all know that buying a banana with a little Fairtrade sticker on it is somehow better than a buying an ordinary banana – but, again, why is that?

Why is Fairtrade the more ethical option when it comes to buying your groceries, and what are the benefits of supporting this global trade scheme? Well, to run you through the basics of what a food item needs to do in order to specifically qualify as Fairtrade, we’re going to answer some questions that will help you understand where your money goes when you pay for that little black and blue sticker

What actually is Fairtrade?

Operating in cooperation with suppliers and farmers all over the world, Fairtrade ensures that its represented workers have their voices heard on requesting fair remuneration in order to secure a more sustainable livelihood. The core mission statement of Fairtrade is that of empowerment among its workers, so that they have some say in the future of their businesses and fortify their viability as traders in competitive organic produce markets. By aligning disadvantaged or otherwise exploited farmers with consumers that will fairly pay for their services, and thereby affording them a wider customer base, Fairtrade endeavors to provide acceptable working conditions, wages closer to those of the cost of living in the respective countries of those workers, and terms of trade which ensure a fair rate of return.

The Fairtrade halo, representing their pursuit of working-class empowerment, is the licensed Fairtrade Mark, which guarantees any product sold with that sticker will have been retailed in agreement with the organization’s democratic trading standards. 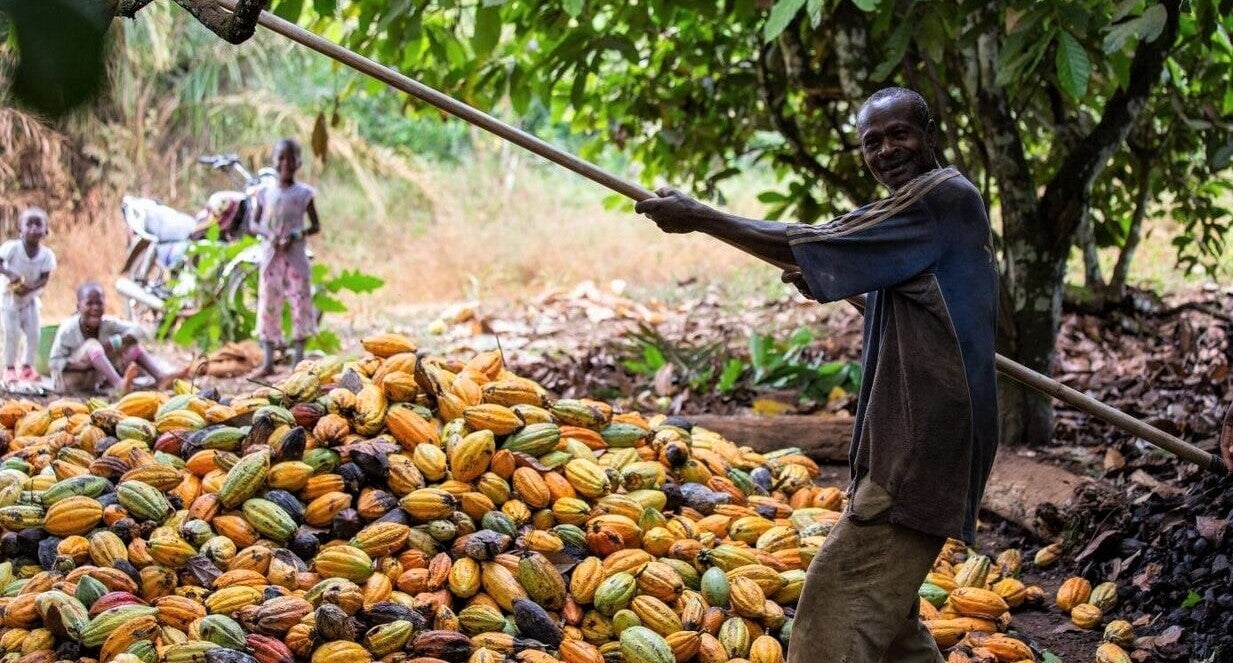 Founded in 1992, the Fairtrade Foundation represents one of the strongest territories of the Fairtrade charity, dedicated to combatting injustice perpetrated against farmers and produce suppliers in developing countries. The UK arm of Fairtrade International, the Foundation is one of the largest Fairtrade markets in the world and the largest platform of consumer awareness in all of the company’s 20 global organizations. Such is the strength of Fairtrade brand recognition in the UK that one in three bananas sold there are Fairtrade-licensed – and yet the majority of Fairtrade products sold in the UK can’t actually be grown there, due to inappropriate climate and longer cold seasons.

Half of Fairtrade is owned by farmers

Determining the worldwide trade routes - and the stream of products imported and exported therein - the Fairtrade system is managed by a board of directors and a supporting General Assembly. Half of that assembly is comprised of farmer representation. Not only working on their behalf to generate fairer, safer working conditions, Fairtrade’s invitation for workers to influence the decisions being made is what gives the company its stable democratic foundation. The farmer majority of its General Assembly is also consulted on the swearing-in of new board members, to ensure the individual in question is actually committed to serving their needs.

In its efforts to empower the most vulnerable producers, Fairtrade operates almost exclusively with independent, small-scale farmers, who comprised as much as 82% of the company’s total 1.7 million represented workers in 2017. The impoverished living conditions of these independent farmers contribute to the lack of education, information, and resources that are often preyed upon by wholesalers willing to exploit their lack of knowledge on market value, often forced to sell their produce out of desperation, at a rate far below what it is actually worth.

These are the guiding principals of the Fairtrade Standards that cater specifically to small-scale farms and plantations, as well as the economic and environmental considerations of that producer. Progress reports are regularly required to ensure that there is a visible enhancement of that farmer’s profit margins, or to determine that their rate of production is not only sustainable but reasonable in accordance to that producer’s physical capacity.

Trade certification unlike any other

Under the Fairtrade Premium written into the company’s trading standards, a small portion of revenue generated is channeled into a shared fund that can be utilized by farmers and field workers all over the world, for whatever expenditure they wish. With the goal being to improve the social or financial wellbeing of these farmers, the free-to-use funds are calculated based on a percentage of the produce they sell, with the amount of this Premium varying from product to product in certain territories.

In the UK market alone, one of the largest consumer bases of Fairtrade products in the world, over €33,000,000 was accrued through the sale of Fairtrade-Marked products. Since the early 1990s, over a billion euros have been earned for farmers through its Premium scheme, making Fairtrade a trade certification distinct from any other, thanks to the amount of its profits that go back to the workforce. The guiding principal of what makes Fairtrade fair is the empowerment it affords the farmers whose labor it utilizes, by allowing them to personally decide how they spend the money earned in global trade and sales.

Keeping things a little closer to home, Buffalo Markets is dedicated to nurturing strong, lasting relationships with California-based farmers in order to provide customers with high-quality organic produce at an affordable price - and all delivered to your doorstep. Not only keen supporters of sustainable farm-to-fork supply routes, cutting down on emissions produced by cross-country food transport needed by competing supermarket retailers, we also have a relief fund for struggling businesses impacted by the pandemic.

Extending restaurant owners a six-month line of credit to give them access to our fresh, market-quality produce, the Buffalo Market Restaurant Bridge could be a lifeline for businesses looking to find their feet again. With over 2,600 items to choose from, why not see what you can be putting on your menu today – or even take a look at our restaurant owner’s blog for tips on how to re-establish your customer base and maximize turnover. After all, knowledge really is power.