Diner Fraud: Yet Another Way Restaurants Lose Money in Pandemic

Running a restaurant is a costly enterprise, no matter where or when you do it. From the initial investment into the business itself – signing the property lease, deciding on your final interior design, determining your marketing budget – to eventually turning the lights on and hiring your staff, every part of getting your restaurant off the ground is a challenge not to be taken lightly. But restauranteurs could always rely on those costs to be covered by their revenue streams – at least, until the pandemic hit. But as if the quarter-trillion-dollar downturn suffered by the restaurant industry this year weren’t bad enough, a new way for restaurants to lose money has recently emerged: diner fraud.

Throughout the pandemic, and in the Bay Area specifically, there has been a reported 62% rise in cases of thefts and burglaries, occurring as the result of items physically being reappropriated by looters or by more tech savvy scammers finding ways to cheat the system. Whether it’s with stolen credit cards, other people’s money, dodgy gift cards, or disputing the charge outright, diners have been finding devious and inventive new ways to con businesses out of their revenue streams in recent months. As though it weren’t already hard enough to keep a business afloat, scammers have been thriving in a time of social and economic crisis – and here’s how.

The practice of pulling a “dine and dash” – defined in our A-Z glossary of food service terminology as finishing a three-course meal and purportedly slipping out for a cigarette, only to never return for the bill – is not exactly a new trick within the hospitality industry, so now the more dishonest diners out there have found new ways to make off without handing over a cent during the pandemic.

Diners are now enjoying their meal, pay, maybe even leave a tip – and then dispute the charge to their credit card provider. These charges will often find their way into the restaurant’s business account weeks after the fact, leaving many business owners scratching their heads as to what was ordered, and who ordered, to generate such a large bill. The most likely scenario is that the dispute relates to an order so deeply lost in a restaurant’s accounts that the manager is unable to precisely determine which party made this claim, meaning they will rarely be able to contact those making the claim and dispute their card charge dispute.

The most frustrating part of this scam is that the disputed charges relate to food which has not made within that month, causing significant upset to a restaurant’s budget. This is because restaurant owners not only have to take into account the usual costs of their overhead, but the amount required to cover whatever sum is being redirected to fraudulent customers, which could lead to over- or under-spending in the successive months to balance out those budgetary costs.

Such is the cunning adaptability of con artists, they will always find new ways to capitalize on a crisis. Whether through supplying restaurants with PPE equipment which transpires to be unfit for use, or by selling businesses a priority supply of non-existent vaccines, there have been countless scams to have emerged over the past year. Now, the latest development by scammers has been to exploit the substantial move away from contact-based and face-to-face interactions. While there is plenty of positive impetus behind the practice of no-contact delivery, keeping both the customer and the driver safe from contamination, it has unfortunately transpired as one of the leading ploys for con artists to consume a product and dispute the charge later.

The scam involves customers using stolen credit cards without having their IDs checked, as the delivery driver is not able to engage directly with the person collecting the food, to check that the name on the order matches the identity of the person taking it. Not to mention that the ubiquity of wearing face masks can make it even harder for an individual’s identity to be established, as many can remain within their right to leave their mask on if they declare a compelling reason, such as severe asthma. But even this can be manipulated, as the scam artist can simply lie and thus have a reason to go unidentified beneath a face mask. 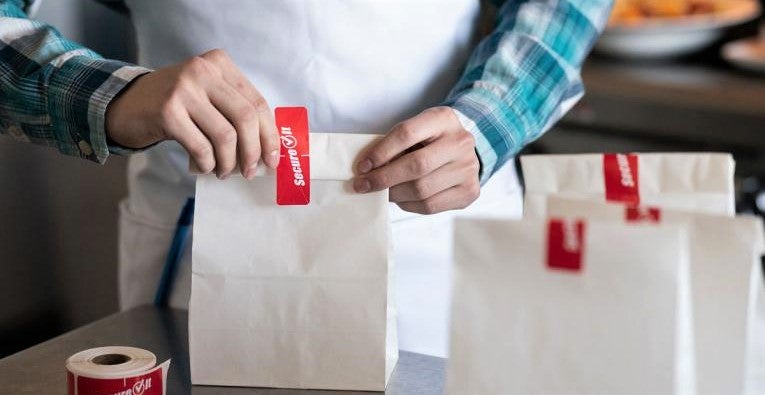 Besides the fraudulent use of other people’s credit card numbers, opportunistic diners are also requesting refunds for food that had already been delivered and consumed, making the case that it never arrived in the first place and that they are being charged for a no-show item – a claim which, more often than not, the restaurant is obliged to believe and resolve for the customer’s benefit. The challenging aspect of this is not only the time it takes to follow-up on these claims with customers – time which many business food outlets simply don’t have as restaurants begin to reopen – but the likely erosion of customer loyalty that will come as a result. Customers do not like to have their honesty questioned, so having the manager on the phone politely interrogating them as to whether or not their order really arrived is a quick way to raise tensions and lose business.

The logistical challenge, on top of the safety risks, of checking customer IDs at the point of drop-off is that many buyers will send out their partners or children to collect the food on their behalf. This is time-consuming as well discomfiting, as delivery drivers will likely need to take the customer at their word that they really are collecting food for who they say they are.

The perplexities of running a business, while trying to keep up with the myriad of changing circumstances brought on by the pandemic, can leave even the most seasoned restauranteurs scratching their heads. But you’re not on your own here: Buffalo Market has its very own restaurant owner’s blog to help guide you through every aspect of running a restaurant, from how to attract millennials and capitalize on a $200 million demographic, to how to run an organic restaurant.

Whether you’re just launching a new business, or have been in the game for decades, there’s always some new tricks of the trade to be uncovered and put to good use. Take a look at some of the tips and ideas we have and see how they can positively impact your business operations today.

Back to Restaurant Supply and Ghost Kitchen